Wow, BTT has certainly been killing it this season! So many great races, podiums, and awesome results across the board.

This past weekend's tent series race, Mass State, was certainly no exception. Pat Dwyer, Braden Larmon, Meg MacSwan, Paul Newman, Laura Miyakawa, and Elaine Metcalf ALL made the podium with top-3 age group places. Meg, Paul, and Elaine all won their respective AGs, as did Pat who took third overall. Also that day, Matt Coarr and Jess Douglas both had top-10 AG placements, and Lucy Herzog had a strong finish too. Congrats, guys!

That same day, Tom Christofili rocked the Evergreen Sprint in Hudson, IL, placing first in his AG and second overall, and in Amesbury, MA, at the Dam Triathlon, the O'Toole Sisters and Laurie Damianos all graced the podium with their presence: Regina's relay team placed third in their division, and Maggie and Laurie made up 2/3 of the Athena podium (Maggie taking first and Laurie third). Terry Reagan, Krista Schepanovsky, and Doug Fuller also had great races.

With all that podium time, the weekend was off to a seriously awesome start for BTT, and it concluded just as nicely on Sunday. Ira Sills reported back from Appleman that there was a BTT trifecta! In Ira's own words:


"Sean Sullivan was first overall! (Awesome). Jen Scalise Marinofsky was first in AG and #7 overall; and I was first in AG! (163out of 500 racers) I knew Sean was fast. I was in the last wave and Sean in the first, but he was done as I was just starting out for the run and I turned around in shock to hear him cheering me on the run out. Knew it was time to pick up the pace. Sean was cheered on by both his parents who raced IMLP with him last year, and the fastest woman was his cousin. Some pretty good genes in the Sullivan family."

Also that day, Stephen Wall had a great race at Ironman 70.3 Racine, Tim Daley had a top-10 AG finish at the Ellington Sprint Triathlon, and I squeaked my way into a top-10 AG finish at the Stowe 8-Miler, one of my all time favorite running races. This was my fifth consecutive year racing it, and though it usually conflicts with popular local triathlons and it's a 3.5 hour drive away, I wouldn't ever miss Stowe for the world. The air is fresh, the course is beautiful and challenging, the race is never crowded, and there is beer and ice cream at the finish. I gave up racing for a goal time a few years ago, and I use this race each year to remind myself why I love to run, catch a little runner's high on one of the big descents, count the cows along the course (6 this year), and challenge myself to pace properly by actually going out slowly (the toughest hills come in the last 3 miles) and finishing feeling strong. 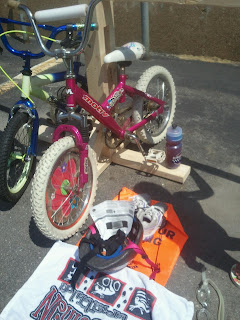 Last but not least, future BTT-er Shelley Johnston did GREAT in her first triathlon and is looking forward to racing again this weekend at MIT. If you go to cheer her on, keep an eye out for her super sweet disc wheel and note how she sets up her transition area like a pro (see attached). Also this weekend,we have teammates participating in the Tour of the Hilltowns, the Nantucket Triathlon, the Danskin Women's Sprint, the Marsh Madness Sprint, and of course IRONMAN LAKE PLACID! Good luck to everyone who is racing, and hopefully one of our Ironmen or (Ironlady) will be kind enough to contribute a race report for next week's WIR. Please?
Posted by Laurie at 2:25 PM