This is the first time I have ever flown to a triathlon which turned out not to be a triathlon after all. This was an adventure. Less than two months earlier, I had agreed to join Mary Beth Begley, Maggie O'Toole, and Trish Kelly in New Orleans for the Ironman Ochsner 70.3. This was meant to be fun and not an A race for any of us. Nancy Arena, Beth Edwards, and two of Mary Beth's friends were also coming down for a long weekend of food, music, and other sorts of entertainment.

We shipped our bikes via Tri Bike Transport, probably the only part of the race trip that went smoothly. When we picked up our bikes at the other end, we were told the winds were too strong to check our bikes in transition. We walked them back to our hotel in the French Quarter and booked two cabs to drive us the 8 miles in the morning. What we did not know was that cabs in New Orleans would not wait. They  came and left before we could get downstairs, only two minutes late. The hotel staff flagged down cab after cab to no avail; they either had fares coming home from a late night or they balked at our bikes. We considered riding the 8  miles in the dark with no lights on bad roads, but none of us really wanted to do that and we were not sure where we were going. Finally, in an act of desperation as we realized we might miss the race, Maggie ran out into the street and blocked a cab in a large Suburban-type vehicle, begging him to take us and our bikes. The cab driver, Elijah, was a gift from the heavens. He folded seats down and helped us carefully stack our bikes in the back. They all fit, and we piled in, holding our wheels and gear bags on our laps.

We got to the race just as they were closing the entrance to transition. Normally, I get the race jitters and would have been a mess by now, but we had already learned that the swim had been canceled and that an extra 2-mile run had been added to the start of the race. Many of you know that I like the swim, and I suffer through the run, so this turned the race into something I would never have signed up for. In fact, it took all the pressure off since I really did not care any more. My goal at that point was to cross the finish line. I was not the only one with this attitude. In fact, everyone around me was relaxed and talking and laughing. It was quite the social scene.

Once the pro waves went off, they lined up the age groupers in our original waves and had us start in pairs, just a few seconds apart, to help stagger the course before we got on the bike. Maggie and I started together, and Trish and Mary Beth started together. It felt very much like we were back in kindergarten on a field trip. For a brief moment, Maggie and I considered holding hands while we crossed the starting line. We were laughing as we ran and were even more amused to see a few participants race in goggles and swim cap with one actually running in his wetsuit!

The bike was less amusing.

We started off with a head wind, were hit with a cross wind, and then finished with winds coming from everywhere at once. It was all I could do to get down and keep my bike solidly under me. People were going down left and right. Early on, I saw Trish at the side of the road with a girl who had crashed. Trish yelled at me to get help and, in the second I took my eyes off the road to look over, my front wheel went into the same joint in the pavement that had brought the other rider down. I knew I was going down as I heard Trish gasp but somehow, some way, I managed to wobble out of that crack and keep going. With police support at every intersection and EMS crews scattered along the course, it did not take me long to send help. Maggie did not go down but managed to finish with three flats and only two spares.

The rest of the ride was like this: wind, wind, wind, riding next to the endless levee, a dead black voodoo cat lying with its tongue out in the middle of the road, lots of long dangerous joints in the pavement, crossing over a draw bridge (scary!), more wind, and why are there caterpillars all over the road? I saw Maggie and Mary Beth a couple of times on the course, but no words were exchanged - just small sympathetic hand waves. Even though the bike had been shortened to 52 miles (because the recent storm had left too much debris), I felt completely beaten by the strong winds on the flat course.

I have never run more than 13 miles in one day, and my longest training run this season had been a split 10-mile run so I found myself pondering the feasibility of completing 15 miles. I seriously considered quitting several times but stopped listening to the debate in my head and decided that I would feel worse if I did not finish. The 2-loop run course was like a flower with several petals. Because of this, I was able to see the others multiple times as we wound around and around. They did not look as if they were enjoying this either. Beth, Nancy, and the others spurred us on with their enthusiastic cheering , ignoring our scowls and swearing as we passed by them. We all finished in the scorching heat. Our savior, Elijah, picked us up again and brought us back to showers and food, and we enjoyed the rest of our stay immensely. 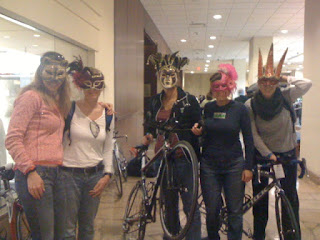 Did I like this race? It was hard but it was fun. The race was well supported with plenty of water and fuel stops complete with sponges, Bonk Busters, and sun screen. The volunteers at the water stops were mostly young kids (if they were students from the University of New Orleans, I definitely feel old!) who were energetic and fun. There was music on the course and a good band after the race. The Blue Angels had been scheduled to do an air show but unfortunately that was also canceled due to the winds. Having canceled the swim two years in a row, the race director finally promised to look for a new swim location next year. Will I do this again? I am thinking about it but I would stay for Jazz Fest next time.
Posted by Laurie at 4:58 PM