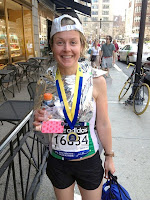 My goal was to for this marathon was to finish.  As you may or may not know, the last year of Jason’s and my life has been full of transition. We moved to and from North Carolina and during that time we bought a new house in Cohasset. That said, I didn’t really do the traditional marathon training.  I kept in running shape by logging 30-35 miles a week. The longest run I did was a 12.2 mile run the week before the marathon in an effort to determine whether or not to run. That run felt great so I decided I wouldn’t waste my number and would give it a shot.

As the week before the marathon progressed, the temperature predictions were getting higher and higher.  I couldn’t believe it was happening again.  I ran the marathon in 2004 when the temp reached 86 degrees and it was not a fun run.  Because of the heat predicted for this year, the BAA did something unprecedented.  If you didn’t want to run you were allowed to defer your entry to the 2013 marathon.  After my 2004 experience, I seriously considered taking the deferral option. However, I had made my decision and once I make up my mind to do something, it’s hard for me to change it.  So for better or worse, I made my race day plan.

Race Day:
5:00 AM: I woke up in Cohasset had a cup of coffee and a hunk of banana bread to get my day going.  As luck would have it, Jason was heading to the airport for an 8:00 AM flight so I hitched a ride with him to the Boston Common where I took the bus to Hopkinton. I LOVE the bus ritual.  It’s amazing to see so many athletes converge on the Boston Common waiting nervously together.  Bus after bus, people everywhere, police escorts and all.... It’s pretty cool.  The one tip I’ve learned after doing this race 7 times is to be sure you don’t start really hydrating before the bus ride.  It usually takes about an hour to get to Hopkinton once you’re actually on the bus.  One year the traffic was SO bad on 495, the bus drivers let people out on the side of the highway to use the woods. There’s nothing quite like seeing a bunch of marathoners running for the woods along 495.

8:00 AM:  I arrived in Hopkinton with no bathroom issues… thankfully. I decided to find a spot under the tent to sit and wait. I wanted to stay out of the sun for as long as possible as it was already getting hot. I needed to really start fueling. I had already had two homemade waffles on the bus (really good!) then with 2 hours to go I had 3 scrambled egg whites with a big bulkie roll.  I also started to hydrate with my sports drink.  I was thrilled that I could eat and drink everything I brought.  I even managed to get 3 Power Bar gel bursts down right before I started to run. I’m usually so nervous I have a hard time getting anything down.  I guess going into a race having no expectations helps calm the nerves.

9:45 AM:  I headed for my corral.  I was in the 8th corral of the 2nd wave.  The BAA takes this corral thing very seriously.  Do not even think of messing with them.  Go when and where you are told!

10:25ish:  I was on my way to and it was HOT!  As I crossed the start line I started thinking… I’m just nuts…. Completely crazy.  What was I thinking? But I also I kept saying to myself, one foot in front of the other.

From my experience with the Boston Marathon, I know the first half of the marathon is pretty easy and that’s where many go wrong, myself included. People tend to go out too fast.  I was determined not to do that this year and I was pretty successful.  I found a comfortable pace and stuck with it.

The temperature was definitely on my mind the whole run.  It didn’t help that they had at least 5 of those lighted road work/construction signs throughout the marathon route, blinking “HOT HOT HOT”  “SLOWYOUR PACE” “BE CAREFUL”.  My strategy to keep the heat in check was pretty simple, every aid station I took a cup of Gatorade and a cup of water.  I drank the Gatorade and dumped the water over my head or splashed it on my face.  There were also spectators with hoses gladly spraying us down.  There were even a few misting tents.  In , a whole crowd of runners in front of me all started shifting to the left.  It was very weird to see. I had no idea what was going on.  I guess I was so in my own head I didn’t notice a huge misting tent to my left!  I skipped it. The fire departments along the route also got into it, opening hydrants to create very big spray.  I used these to a minimum as I hate when my feet get soaked.  One, your wet shoes become weights – as if you need that!  And two, wet socks on wet feet can cause serious blisters.  Don’t get me wrong, I did get misted/sprayed at times and it felt great!!  Really what worked the best for me, were mind games (trying to trick myself into thinking it’s a beautiful day for a run, etc) and to just focus on the marathon and keep my pace in check.

I made it through the halfway point and felt really good, but I still had a half to go and I knew it would be tough. The second half of the marathon is where you hit the famous hills! On what is considered the first of the three hills, I could see a woman to my right out of the corner of my eye. She was running strong up the hill.  Having her there really pushed me.  We continued through all the hills together onto where we lost each other. But we were luckily able to catch up at the finish line and thanked each other for the motivation.  I LOVE the raw human interaction that happens when I race.

Going into the home stretch the heat and the no long run training, started getting to me.  It didn’t help that people had realized they weren’t going to qualify or PR so they started walking.   And because of the heat, many people who were dehydrated and needed to walk.  I almost ran over someone who was running in front of me and stopped out of nowhere.  It was a hard, hard stretch. I really had to weave my way down . I was hot and tired too… and I really wanted to stop but I knew Jason was anxiously awaiting my 40K split as that’s where things went awry last year, so I kept going – trying to stay on pace. I finally reached that 40K mark. It is right before you go over the Mass Pike down into .  In a way, I felt like that was my finish.  Jason would know I made it.  In talking to Jason later, my 40K split never recorded! Ha!! To him I went off the grid in the same place as last year!  I saw my dad a short time later at the corner of Commonwealth and and he let Jason know I was heading in for the finish.

I finally made it to .  I knew I would do it and in pretty decent time considering the conditions, but I was all done.  I had given it my all. I finished in 3:39:07.  Qualified for next year with 52 seconds to spare!  A bit tight but I did it!  In retrospect, I could have used some more long run training, but I do think not getting all worked up about this marathon really, really helped.  I went out to have a good time and I did.  I didn’t put pressure on myself.  I also know this course extremely well and have 10+ years of marathon experience so that certainly helped.  All in all, I really think it was the best run of my life.  Not my fastest but it just felt SO good in SO many ways.
Posted by Laurie at 10:34 PM