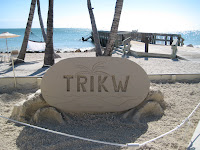 (This report is in three parts)

If you're going to do a triathlon in December (or in my case these days, at all), then you might as well pick a "destination" race that focuses as much on the destination as the race. is that kind of place. So Laurie, Trish, Tim, and I (and friends of BTT John and Ali) all raced this past weekend. Full disclosure - Ali and I did the sprint while the others did the Olympic - hey, it's a miracle I did this at all. Anyway, is just about the perfect place for a race and it didn't disappoint. But as we were waiting in line to pick up our numbers there were ominous warnings of 30mph winds the following day which "may cancel the swim" according to some guy waiting in line who, as it turns out, knew absolutely nothing about winds or triathlon swims. But we were worried, especially because for some of us, the swim is the fun part - bring on the wind! We chewed on that all day, then had a drink and watched the sun set in preparation for the race because that's what you do in . After a good meal and some birthday cake for Trish, we settled in at John's place for the big wind storm that we feared would eventually blow in, ruining what was supposed to be a fun time.

But alas, those fears were unfounded. Race day was warm (70 degrees) and windy (18-20 mph, not 30) with some pretty good chop on the water. The Olympic race went off at 7 on the dot. I mean really - there was no waiting for people this morning - half the wave was still warming up when the gun went off. Things may be laid back in , but holy cow, they start races on time. The sprint was a bit delayed because one of the buoys popped, but they hauled another one out and got us going. I was in the fourth wave, which gave me ample time to strategize my swim. It was a long half mile but I love choppy water and had a great swim. The transition was ridiculously far (think longer than ) and out of transition I had to stop because mud got in my cleats. No biggie, I thought, if that's the worst thing to happen today, I'm good. Famous last words. In what can only be described as a first, the police actually stopped race traffic for about four minutes halfway through the bike ride. Yep, cars were getting antsy outside of the shopping area and they STOPPED TRAFFIC. I was incredulous. So after they let us go I began to bike madly and had a pretty good ride through the wind. Computer time was 41:26, but official time was 45:11 because of the stoppage. Grrr. The run was flat and windy out along the beach, with a tailwind on the way back. Really, really pretty. But notwithstanding the stoppage, the race was fun and I ended up winning my age group and getting second master's woman overall. Ali (Tim's gf) had a great sprint race and was also happy about the day.

As for the Olympians, as I call them - all did great! Laurie won Athena 40+, Trish and Tim had great races, and John completed his first triathlon ever in 2:42! That's without a wetsuit and without ever having swam in open water before. Nice. I think we have him hooked on the sport.

We also had a little time to scout out the new BTT yacht which will be ready for next year when we get a large contingent of BTTers to . 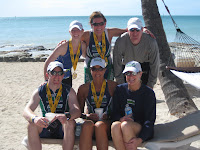 My biggest takeaways from the race were - wind, wind, wind, fighter jets practicing overhead, roosters on the road, the sand finish to the run (threw me!!!), and the wind, wind, wind. Oh yeah, and the fact that the buoys for the Olympic were virtually impossible to see, and there was no marker on the pier where we finished (I had NO IDEA where to go!). Volunteers were abundant and very good. Oh yeah, how can we forget? Chris McCormick did the race and won, of course. 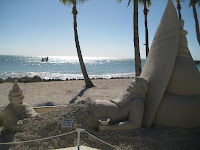 I completely agree with Katie on the "destination" and with Laurie on how great the volunteers were on the course (who apparently were all Navy people?). Overall, I thought it was a great race. Obviously, for a second year race, it still has some wrinkles to iron out. For me, it was the registration process (a little more time consuming than needed), and the swim course!

We were told in the course description meeting that the first buoy would be orange for a left turn, and then 2 yellows to mark the back stretch. Well, the first two buoys were orange, but because of the shape of the swim course, we could not see the far orange buoy all the way by the Southernmost point. Approx. 20 swimmers (me included!) swam to the 2nd buoy, and I was approximately 30 yards away from it when told I had to go to the buoy much further right of me, adding another 2 or 300 meters to my swim. Hopefully next year they will add more buoys at shorter intervals to make the course a little easier to navigate. Even Macca ended up swimming to the wrong pier for the swim exit before being directed to the right one.

I thought the bike course was a lot of fun, especially going through the Navy Base with the fighter jets taking off, and no vehicular traffic! The run was awesome along the ocean, but the wind made for a VERY tough day given it was a flat course! Watching Macca cruise by on the run was pretty awesome, too, given he took the time to give a quick wave, and a "what's up?" as he went by. It was also nice to see an e-mail from the race directors today addressing the issue with the Monroe County Sheriff's department (Ali also got stopped for 4 minutes, and one lady she spoke with got stopped once on her way out, and once on her way back), as well as the swim course!

I think this will prove to be a top notch destination race in the next couple of years, especially given the improvements they're already making to the roads!