Pat: Okay Matt…tell us a little about your athletic background and how you got involved with triathlon. 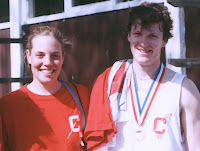 Matt: I swam competitively until tenth grade. That is when I started rowing. I was nothing special in either sport, but I graduated from high school intent on making a mark in intercollegiate athletics. My freshman year was the first time I ever made a "first" boat. We had a perfect season, and I figured we were positioned for three more years of that. That did not pan out and those failures still motivate me. Still, rowing dominated my life for those four years. Even my girlfriend at the time, "Fun Crawford", was a rower (Ed. Note: FP=FC).

I stopped rowing after my club four got a complete drubbing at the '96 Olympic trials. I was married and already working with a startup. In short, I was not committed enough to see a clear path to the next level. Flash forward to 2001 and I got a half-baked scheme to do Firmman. Shay had done Danskin the previous year. It was clearly out of the question for me to be one-upped by her. Danskin denied me entry, so I went looking for something that was hard to finish. A half iron seemed to fit the bill. I had started running a little bit with Ellie in the Baby Jogger. The two of us ran 10 miles once or twice before the race. Suffering through the end of the run apparently did not dampen my enthusiasm.

After Firmman I ran into former BTT member Drew Gronewold. We had known each other from rowing at Cornell and he suggested I join what was, at the time, the Wheelworks Triathlon Team. Despite their obvious reservations about me, Maggie and the rest of the EC saw fit to accept me.

Pat: I’m sure there’s more than a few people that want to know the answer to the next question, how do you train for ironman with 3 kids?

Matt: I will divulge some secrets - but only because you have been plying me with gimlets. To be honest, it is getting easier. The kids are older (12, 8, and 4) and much more reasonable. Eating dinner together is critically important, and I would rather stay up late than wake up early. That means I go to the pool, or to the pain cave, or out for a run after the younger kids have gone to bed. Most American adults are wasting several hours every evening watching TV. I choose to spend that time training.

Avoiding the TV probably frees up two thirds of the time I need for training. The balance comes from pockets of time that are hard to use in any other productive capacity. Some concrete examples of this "opportunistic training" are:

The least disruptive way to get the notorious Sunday "Come to Jebus" rides is to get up early. I can summit Wachusett and still be home by noon. Then I can spend the rest of the day with the family watching the lawn die.

Pat: What do you hope to bring to your position on the EC? Anything we should be looking forward to?

Matt: Well, I obviously want to help everyone step it up a notch. Depending on the athlete, that could mean finally riding a century at Training Weekend, working out five times a week instead of four, going 10 minutes faster at Timberman, or not getting dropped by Austin on the Kanc. In your case, it means riding with me more than six times a year. Our houses aren't even a mile apart! (Ed. Note: Riding with Matt means sitting on his wheel or the wheel of his training prosthesis….[Joe] Kurtz).

I am pleased with the interest in the December challenge. That has me excited to think up something novel for each of the coming months. I am going to stay away from the unimaginative "most yards/miles/hours" type challenges. I will be looking to keep people engaged and competitive across a range of abilities and commitment levels.

Pat: So, for those that weren't there, talk a little about the epic duel that you and I had at IMLP 2010, where we both made the podium. I still have nightmares at night where I'm trying to run you down!

Matt: There was more than a little tension between us leading up to that race. One of us could have knocked the other out of Kona. That would have been a tough outcome.

It ended up unfolding about the way most expected it would. Our swims were roughly the same. I had a stronger ride and a good run. You had a good ride and a stronger run. The better runner usually wins. Neither of us was prepared for how long it would take for you to catch me, though (Ed. Note: Matt had 10 minutes on me off the bike). The end result, for both of us, was a huge helping of hurt in the last few miles.

Joe Kurtz got me a chair just beyond the finish line. Taking another step was out of the question. A little while later, after a weak wave to my family (Shay, kids, and parents), he helped carry me into the med tent. While I was on my second IV bag he reported to me that you had been vomiting in the finishing area and now had a cot of your own in the big white tent. We could not have gotten much closer to the edge.

I really found where the demon lived that day. We were both still feeling it when we went riding over Timberman weekend.

It bothers me that I lost that round, but if I wanted to win every race I could just stay home and race my kids. Those three minutes represent around a 0.5% difference, which is astonishing not just for how close we were, but also for how eager it made me for the rematch (Ed. Note: I’m waiting for the promoter to set up the best deal for me).

Pat: Why do you think you're a "repellant" for attendance at BTT events? Intimidation? :) I know I'm intimidated every time I sit at Helens (which isn't too often) and have to listen to you, [Joe] Kurtz, [Austin] Whitman, and [Chris] Borges talk over my head.

Matt: I have been told we use big words. Sorry about that. You should ask Joe Kurtz about the intimidation. He brought a (650) disc to a recovery ride with me while I was tapering for Kona last year.

Pat: Since this seems to be a popular question, tell us the most embarrassing thing that has happened to you at a race.

Matt: This is no contest. Littleton Appleman, 2009. My wetsuit opened and flooded during the swim. I followed that up by running to the wrong part of transition and failing to immediately find my ride. (It was racked between a pair of hybrid bikes resting on their kickstands. I am not kidding.) Then, despite the fact that the race takes place about three miles from my office, and that I had ridden the course two days earlier on my way home from work, I took a wrong turn and went off course.

The final insult was, of course, an email from you asking why my bike time was so slow.

Matt: What I will say is that my friends and I left a lot of opponents shirtless after races. FP and friends took off their shirts and did "topless 10s" out on Lake Cayuga every June. They never told us ahead of time when they were going to do that. We never had binoculars when we needed them. (Ed. Note: Having an Ivy League degree does not mean that you comprehend the phrase “speed round”).

Matt: I had the hottest body marker EVER the last time I was in Kona (Ed. Note: This is why he sticks to the long course stuff. No understanding of “speed”).

Pat: Wachusett or the Kanc?

Matt: I'm going to go with whatever I am on over whatever you are on. (You can't leave me an opening like that.)

Pat: Lastly, tell me your favorite part about being on the Blue and Green?

Matt: I would have to say it is the ready supply of post party scapegoats for FP (aka Fun Pokress aka Shay Pokress).

She can fill in the blank: