I write this report under extreme duress...my pool waiter only brought me 1 Pina Colada this morning...instead of two...but I digress.

The family and I flew out from on Thanksgiving morning to Cancun, and then took a bus to Playa Del Carmen, and then a ferry over to . All in all, a pretty hassle free travel day. Weather was very hot and very humid, but was glad that I got here Thursday, so I could have a few days to try and acclimate. However, there was a trade-off, as hanging around an all-inclusive resort is not easy for me to do when beer and tequila is flowing freely, but I was able to resist, but honestly by Saturday I was way beyond ready to go.

Friday I went for a practice swim at the course, which was absolutely beautiful. Crystal clear water, with fish swimming all over the place. I then went off to Registration, which was pretty painless. Saturday was bike and gear bag check-in, which again went pretty smoothly, considering that this is a 2 transition race. (You only have to check in your gear at T1, and then they transport your T2 gear to T2). Back to the hotel, and just relaxed for the rest of the day.

Sunday morning, I got up at 4:20...had breakfast, showered, and T and I were off to the start (they had shuttle buses from the hotel to the start). 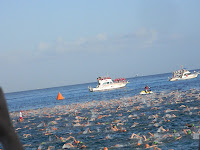 Got to race start, and weather was beautiful, (hot and humid), but calm and very little wind. Pro athletes went off at 6:40, and then they shuffled the 2300+ age groupers onto the dock, and then into the water. (It is an in-water-start, where you have to jump off the dock, so we were essentially treading water for about 10 minutes before the start. 7 am and the cannon went off, and it was "Go Time." The course is a single lap in a rectangle shape, running parallel to the shore. The first 600 yards are against the current, which you couldn't really tell, as it was just complete mayhem and all style, pacing and form, went out the window. After the 2nd turn, you have a long straight all the way down with the current, although as it was so calm, there was very little current. Things started opening up around here, and I could eventually get into a rhythm. Aaaahhhh the jelly fish.... we were warned about it, but was not sure what to expect. I still don't know what they were or what they looked like, but every once in a while, would feel this sting on my body, which would last for a few seconds and then be gone. I was stung quite a few times, but it was more of an initial shock than any sort of pain. Again, the swim was just beautiful, with great visibility and tropical fish all over the place. They also had scuba divers located at every buoy who were just "hanging out" on the sea floor. Swim was over, collected bag, into changing tent, and onto the bike and out of T1 without incident. 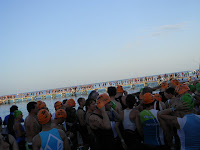 The bike was a 2 3/4 loop (3/4 as you finish at T2, which was in the town center). The bike course is very flat but very windy, and already at 8:30 the heat was really starting to beat down. The first 10 miles out, you have a little bit of a head wind, but it was really congested, which took that out of the equation. There was certainly some drafting here, but not too intentional and I think that even the marshals understood this, as they would drive by just blow their whistle and gesture to people, instead of actually issuing penalties. The next 10 - 15 miles, you are on the open exposed south side of the island, where the wind is extremely brutal, and the reason why disc wheels are banned at the race. It is a constant side wind that is blowing against you the whole way, and you really have to hold on tight to your bike to ensure you are not blown off. After this, you turn left and head back toward town, where you have a decent tail wind, and are able to make up some lost time from the previous section. On the 2nd loop, the headwind picked up quite a bit on the first section. (Or maybe it seemed that way because the field had opened up). On the 2nd section, we went through a brief rain shower, and then cleared by the time we hit the back straight. On the 3rd loop, there was a huge group of drafters that came by, and they were not even trying to hide it...it was crazy. About 5 minutes later, a marshal came by me, and I was hoping that he was gonna penalize them. I could still see them in the distance, and saw him come up behind them. A few minutes later I got to the penalty tent, and there were 6-8 of them that were just checking in. YES...There is justice!! Unfortunately there was one guy (DC Triathlon Club) who was not there, who was drafting virtually the whole race that I could see, and a lot off of me too. (I blew past him within minutes of the run, and saw him walking by the 1st loop...LOSER!)

T2 was quick, got my gear, shoes on, and out onto the run. The run is also a 3 loop out and back course, which is very flat and essentially, goes along the coast through town. On the way back from my first loop, probably around Mile 6, we had an insane tropical downpour that went on for at least the next hour and a half. Shoes were soaked within minutes. Roads were flooded, and each intersection was like a mini river. At one intersection where the flooding was really bad, you actually had to walk, as the water was midway up your shin. I guess I got an early start to trail running season. The downtown area was packed with spectators and crowds going crazy the whole time, even in the rain. They truly are a festive bunch of spectators. I held a good steady pace for most of the marathon, with dropping off in pace over the last 4 miles or so.

Through the finish line, and food and drink, and volunteers were all great. Massages were a very welcome site.

All-in-all, this was a fantastic race. I think that the organizers did a great job with logistics in transporting athletes, and getting gear between the 2 transitions.

This is a race I would highly recommend!