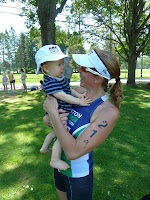 I decided in the summer that I wanted to finish my season with something big, especially since I don’t know what 2012 will have in store for me. That’s where the idea to do the Bay State Marathon came from. It is a great, low-key, local race that I could decide to train for but then sign up for last minute in case I decided to back out. No pressure….

I went to pick up my number on Friday and accidentally picked up the shirt for the half….was this a sign? Should I do the half? (They had plenty race morning, so I was able to switch). Throughout my taper, I had a lot of doubts about my training, since I really only put in a month of marathon training. Quality over quantity, right?....We’ll see how it goes…. It’s kind of strange for me to be doing a big race and staying at home. I know a lot of people say they like that, sleeping in their own bed, etc. But for me, this was the only drawback…..I felt like I could use a little more hype for a marathon. The day before was a normal Saturday around the house, cleaning, errands, etc….nothing that made me feel like I was about to race the next day. And the day after the race, was just like any other Monday (except for the incredible pain!)

Race morning…..perfect marathon weather! In the low 60’s and partly sunny….I didn’t even have to think about what I would wear. I felt nervous, but this was the one time I was glad there was no hype. I felt more relaxed than usual. Race morning is a little different with a toddler to take care of….I have to say I was wishing for a swim and a bike before tackling this run. I wasn’t sure what to do with myself, so I did a quick warm up, kissed my boys and was ready to go. At the start, I had my usual tears and thoughts of “I can’t believe I am doing a marathon today”. It doesn’t matter how many races I do, I still fell this way before the long ones. The start was a little crowded, but nothing like the big marathons. And even with the half starting at the same time, it quickly thinned out. Throughout the race, it felt like I was doing my usual long run, just with some other runners around.

This is the first race where I wore my garmin and I did appreciate knowing my pace throughout the race. I had a particular goal in mind and the garmin helped me to stay on target. Typically I do the math at each mile, but I was very happy not to be doing it! I started out too fast (I knew I needed that swim and bike first to warm up!)…..I decided to take it down just a little, but race faster than my target pace and try to hang on. I was definitely unsure of what would happen in the long run by doing this, but I felt really good, so decided to go for it. At the half, I was still ahead of pace, so continued with my plan to go for it and just hang on at the end.

I only had a couple of bad times during the race…..a couple of times with some gi issues that required me to stop and visit the port o potty…but I was able to start running again. I was glad that I had built up a little time cushion. A word of advice…..if you haven’t been drinking caffeine for 2 years, don’t try caffeinated gels…just an idea…. I continued on, in the back of my mind hoping that the wheels don’t come off after mile 20…. I made it through mile 24 before I really thought I couldn’t run anymore, but this is where it became mental. I kept saying to myself that I worked too hard for too many miles to let it go now. Almost there….. This is the first time that when I got to the finish line, I was in tears, not tears of joy, but in pain. The first thing I said to Dave was “good luck with that!” because he is running New York in a few weeks. I was hurting, but I was ecstatic because I had accomplished what I set out to do. My time….3:34:15. I qualified for Boston and New York and PR’d by 20 minutes. Thank god it is for Boston 2013, because I don’t think I want to do another marathon anytime soon.

I definitely recommend this race to anyone who is looking for a laid back marathon that is mostly flat (there are some short hills). It is very well run…the volunteers were great too! This race has come a long way since I did it in 1999…..