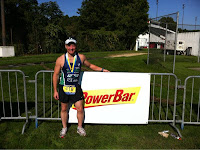 If I have ever gone into a race less prepared, I don't remember it.

My training has been less-than-usual due to work, travel and other commitments. I never bothered to set out my gear or check the course map. I think my taper started about 2 months ago when I finished the Sharon Triathlon. I managed a single 10 mile run about 10 days before the race.

I wasn't expecting much.

And my morning started off on the wrong foot - or shoe, as the case was. I tossed on my shoes and running gear, drove to a gas station to fill up, and thought, "My shoes feel funny." I realized I put on some random pair of non-running tennis shoes. Thankfully, I was close to home and could get my New Balance running shoes with little delay in getting to the race.

At the race, my warm-up consisted of running to the (disgusting) portapotty and some light stretches. Ran into some Boston Triathlon Team mates and chatted. Got into the starting pen with 5000 friends, had a Power Bar Gel, and we were off.

If you've never run the BAA Half on the new (2010 or later) course, it is beautiful. It goes along the Emerald Necklace from Franklin Park down to the Longwood area and back. Nice scenery, picturesque location, and some interesting architecture. The weather was great - sunny and warm. Couldn't have asked for a better day.

I was setting a decent pace (for me), passing folks, chatting with some, sharing jokes with others. Another Power Bar Gel at mile 6, and try to figure out where the water stations were (something else I didn't do before the race). My Garmin 405CX gave me a few issues, so I was questioning my pace through the second half of the race (it was giving me numbers, but they didn't make sense with the distance signs the race had up). Oh well, enjoy the day, and keep trotting.

Remember that 'Course Map' comment earlier? I was a little thrown by a course change (coming into the finish stadium from the left instead of the right); a little thing but could have been prevented had I actually looked at the map.

And disappointed I didn't see a zebra in the zoo this year.

Coming into the finish, I sprinted hard (or at least whatever I could muster), and managed to set a half-marathon PR by about 8 minutes! Not bad for poor training and no race strategy! Imagine what I could do if I actually worked hard at this stuff!