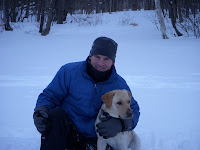 When most triathletes finish a race, the first question they are asked is, "how'd it go?" or "what was your time?” However, for Brian Kearney, an FDIC bank examiner based in Newton, the inquiry is entirely different: "Where's Newman? Is he here?"

For those who know him, this should come as no surprise: Brian, a literal man-for-all-seasons, is the owner of a yellow Labrador named Newman, perhaps the most famous and well liked dog on the New England triathlon circuit.

When he is not travelling for work (his job keeps him on the road about 60-70 days per year), one thing is certain: Brian, and usually Newman, will be outdoors. Depending on the season, this could mean snowboarding at Killington (Brian is an Ambassador there); training and competing in triathlons; hosting BTT members at his family's Lake Winnipesaukee home, or sailing in the Virgin Islands. Most remarkably, recent neck and knee surgeries haven't slowed him down one bit: his last race was a 5 hour performance at the Timberman Ironman 70.3 event on August 20.

Growing up, what was your sports background:

Basically, anything that kept me moving - soccer, basketball, track, baseball, swimming, waterskiing, snow skiing, sailing...competitive team spelunking (just kidding). Oh, and my parents implemented a training regimen that included pre & post dinner driveway sprints, which was really just their way of ensuring that I would burn off enough energy to actually sit down for 5 minutes...

When was your first triathlon and what brought you to the sport:

My first tri was Concord, NH, YMCA in 1987. It was actually a swim/run/bike format and the only one like that I've ever done. I think I was clueless at the time of the danger of finishing on the bike in an all out sprint because it never crossed my mind how strange it was. I had done some running races starting in 4th grade, but to say I had a track career would be a bit misleading, I was no star. My older brother inspired me with his interest in bike racing after he got out of college and he did the family's first triathlon. He didn't stick with the triathlons, but he convinced me that I should DEFINITELY do them...

If you could substitute one discipline in triathlon and replace it with another, what would it be:

My weakest leg is the run so I guess I'd replace that one. I love snowboarding, but we'd have to work out some of the logistics - snow and open water swimming don't really go together well.

What one race is on your triathlon/multisport "bucket list":

I don't really have a bucket list, yet, but have started thinking I need to do some destination races. Any ideas?

If Snow, Sailboats, the Superbowl, Beer, Bicycles, and Basketball disappeared forever from earth, which would you miss the most:

What's on your playlist these days:

What's the most money you ever found lying on the ground?

What's the longest you ever sat in a plane on a runway?

Strangest thing you ever saw on a business trip:

Here's a few odd things I've encountered: an ice storm in Atlanta where they only had 3 functional ice trucks for the entire city, are you kidding me? An 83 degree day in Boulder followed by temps in the 30's and snowing hard a day later. Bike lanes on major highways in Colorado - different priorities out there. Ted Kennedy (the older version) sitting in coach on the DC shuttle.

What two things do you never travel without?

My cell phone and flip flops.

Best city in the world:

What sporting achievement are you most proud of:

What sporting moment was the most fun/memorable (either as participant or viewer):

I'd have to go with the Sox in 2004, at the Stadium in South Boston, it was a madhouse, friends sprayed champagne all over the place.

Most underrated bar in Boston:

You mean other than the Kinsale and Asgard? If you asked about favorite ski town bars I'd have a more informed opinion (Longhorn or GLC in Whistler, No Name Saloon in Park City, and Lookout in Killington). Recently had a good time in town at Post 390 with some BTT and FOBTT so we'll go with that.

How many Maple Syrup trophies from Timberman do you have at home?

Excluding the 2 from Granite Ledges and the 1 from Mooseman relay, maybe 5? But one was a relay that I really owe to BQ [Brian Quigley] and Joe O'Leary. Pancakes anyone?

Word association. What's the first thing that comes to mind when you hear:

Tour de France: The Alps, one of these years

Ironman: no thanks, keeping what little cartilage I have left

Hills: down as in downhill

Snow: freshies, no friends on a powder day

BTT: Blue and green and fun all over