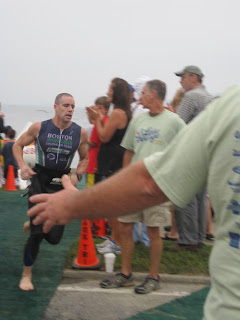 
So, I signed up for this race in July. Originally, I was going to do Firmman or another half, but it just didn't work with my schedule. So, I did some research and found this race. It's a first year race that was being run in conjunction with an Olympic distance race that they've held for 6-7 years....so I knew that it would have decent direction. Also, it was fairly inexpensive for a half...only $165. Given that I wasn't positive I would be able to do the race (due to recovery), the price was appealing in the event I had to bail.

The race was in Lake George, NY. So, Jenn and I found a dog-friendly hotel and decided to make a weekend of it. We left Friday night and drove part way. We got up early on Saturday and finished the trip. When we got to LG, the Oly race was going on (it was held Saturday...and the half on Sunday). I went about doing my pre-race warmup. I went out on the bike for a quick 25-30 minute ride. Immediately I realized that I couldn't shift into the big chain ring. So, I just kept it in the small chain ring and rode around a bit. I packed the bike back up and went for a 15 minute run. During the warmup, I really wasn't feeling good. I just didn't have much snap in my legs. Afterwards, I found a bike mechanic and had my bike adjusted....shifting problem solved. Then it was onto breakfast, where I did my normal carbo load (biggest meal of the day) and I basically ate for 3. Finally, we headed out to drive the bike course.

I always suggest seeing the bike course before the race....and this was no exception. This bike course was no joke. After a short semi-flat section (about 3/4 of a mile), it begins climbing out of town (ala LP). It's basically a 5 mile climb. Unlike LP, while you do get some good downhill sections, it's not a screaming downhill. But, the course was very fair. On the website, the course shows a Category 4 and 5 climb on the course. All in all, the course looked great....good roads and little to no traffic on most of it. I had a second reason for driving the course here. After I registered, I realized that they capped the race at 250 people....not very big for a half ironman. So, I knew that, even in my current shape, there was a good chance that I could be out front for part of the bike. The remainder of the day did not go as planned...hotel wasn't ready; traffic around Six Flags Great Escape was a nightmare (registration was there); wasn't getting hydrated or rest. But, as per normal, my wife did her best impression of Mother Theresa and settled me down.

I woke up around 4:30 on race morning, got in my nutrition and headed down to the race. Pre-race was uneventful, except my stomach was a mess. I must have made 5 trips to the bathroom. I also wasn't feeling that great. Jenn wasn't worried...because this has happened before and I've raced fine. I was in second wave....with waves going 3 minutes apart. The first wave was Men 39 and under....so I knew that my competition would be in my wave and in front of me. I wasn't too worried about any of the later waves.

SWIM: I've been feeling pretty good in the water. So, my plan was to keep the swim long and steady. Finally, my wave went off. I got right to the front, along with one other guy. He seemed to be swimming well...probably a bit faster than me, so I decided to drop back and grab his feet and let him do the work. This lasted all of 10 seconds when I realized that this guy could not navigate. When I looked up, he was headed in a 45 degree angle from the buoys. So, I reset and decided I would just swim on my own. I ran across this navigation-challenged swimmer throughout the swim. The swim was a rectangular swim....and very open...not much contact. About halfway on the way out, I began passing the first wave. About halfway on the way in, I realized that there weren't many people from the first wave left to pass. But, I could still see my buddy who was doing a tour of the lake...back and forth....he even ran into me one time, which is quite ridiculous since there was no one else even close to us...and the lake is HUGE. This guy's navigation was so bad (worst I've ever seen), that he should have beaten me by 45-60 seconds...but only managed 9-10. Out of the water and through transition (30:35).

BIKE: Jenn yelled at me that I was in 6th place overall...including the first wave. The guy in the lead had about 5 minutes on me. I used the initial flat part of the bike to get into my shoes, which were already on my bike. Then I dropped into the small chain ring and began the climb out of town. First, I picked off my buddy from the swim. Then I would spot riders way up the road, one by one....and use them to gauge off of. I felt really good, early. I tried to keep my power numbers in check. Around mile 21-22, I saw a rider. I thought that there was one more guy in front of him, based on Jenn's early assessment. But, while I was working to catch him, I caught a glimpse of a car in front with the hazard lights on. Hmm...was that the lead car? I passed the guy around mile 23 and tried to ask him if he was in front....but he either didn't hear me or didn't want to tell me. But, I had a strong feeling he was. I received confirmation later when I passed a couple of spectators out on the course. I locked in and tried to stay consistent. I was fortunate to know the course....it helped. I will say that one thing the race director could improve is to keep the lead vehicle within sight of the lead rider. There were several times that it disappeared in front of me....for several minutes. This wouldn't have been a big deal, but the roads weren't closed. Not only is the lead vehicle there to "lead", but it also helps notify the other cars that we're racing. I got buzzed pretty close by some NY jackass, even though I was hugging the line and there was no other traffic in either direction. Once I was in the lead, I caught myself going up a short hill in the big chain ring. I quickly scolded myself and decided to be conservative for the rest of the ride...small chain ring on all hills. As I headed into T2, I figured I had a decent lead....at least I was hoping, since I wasn't quite sure how I was going to run. I will be honest....I looked back many, many times. I was fearful of a late charger catching me. Coming into transition in first was pretty cool....more so than a sprint or olympic...as there is so much anticipation for the first rider to come in. I had my normal quick transition and out onto the run (2:37:17....note: bike was estimated at 57 miles).

RUN: As I headed out onto the run, nobody else had come in on the bike yet. I hadn't previewed the run, so I wasn't sure what to expect. Not to mention, this would be my first 13 mile run since Kona last year....and my third bike/run of the year. Normally, this is when I "go to work" and make up ground. But, my run is so unknown, that I was honestly worried about getting caught. I had a case of the swivel heads at the beginning. The run went straight up hill...and continued to go up for about 3 miles....it was tough. Much of the run was on a bike path. It was a lollipop shaped course...two loops. The turnaround was about 3.5 miles in. I checked my watch and started looking for the next runner. Finally, I saw a runner. I estimated that I had a 6.5-7 minute lead. Although I felt awful at the beginning of the run, I started to get my run legs and was feeling okay. While the bike was very humid...it was cooler, 74-79 degrees. But, the sun was out on the run...and it was getting hot (while still humid). At this point, I knew that no one was catching me. I would have to have a complete meltdown. As I got off the out and back section, the run went back on the road and downhill. This was very tough on the quads. As I headed back towards transition, one of the race directors was joking that I had 10 miles on the field. Second loop was uneventful. Many more people on the course during this loop. Again, one suggestion for the race directors would be to have a lead bike, which they didn't have. On the out and back section, I decided to check my lead again. I estimated I had at least 9 minutes on the next racer at this point. I was fairly conservative on the second loop. As much as this was my longest run of the year...it still went by fairly quickly. I was happy about this, as I hadn't worn socks and my feet were really getting chewed up. This was mainly due to the humidity...my feet were just squishy in my shoes. As I headed into the finish, the guy joked that I now had a 20 mile lead. I headed across the finish line and was happy to be done. Before the race, I anticipated that I could run between 6:45-7 minute pace. I was pretty close to that estimate (1:27:22).

While this was a small race, it was still very cool to win. I've won other races...but winning a half ironman is an experience that I may not have again....especially at my age! This was a nice way to finish my very short season....and gives me some fuel for next season. They also gave some pretty unique awards. Now, onto my short off season...before the build up to 2012.
Posted by Laurie at 10:19 AM