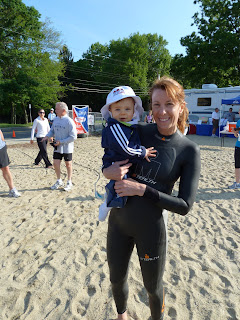 The member spotlight is back! Our lucky subject is none other than Jen Scalise-Marinofsky, accomplished athlete and long-time member of the Boston Triathlon Team.

So how did Jen get involved in triathlon? Her propensity for competition started early, at age 5 when she began to swim. I can see it now, Jen in her little American flag speedo just crushing the 8 and under crowd. She swam competitively through college, and after college wasn’t quite ready to give up swimming. She watched a friend do a sprint triathlon and decided she needed to do one as well. But she also vaguely remembered flashing back to a childhood memory of watching the Ironman on TV and thinking those people were crazy. Who would do all that? Fourteen year old Jen never would. Of course you know how the story goes…Jen does sprint triathlon, Jen signs up for Ironman, Jen decides to join a triathlon team, Jen is considered one of those crazy people. It’s funny how life turns out.

But her start was far from glamorous. Her first triathlon was the Falmouth sprint triathlon in 1994. She did it on a mountain bike and couldn’t even run the whole 3 miles. Then, the first time her husband, Dave (also a BTT member), came to watch her race at the Hyannis Sprint, she was running toward the finish line and had to veer off course to throw up because she didn’t want him to see her (who would?). But he did see her and wondered why she was running away from the finish line. But if those were her only dark days, there would be many more bright ones ahead.

Jen joined what was then Wheelworks Triathlon Team in 2001, which underwent a name change and became Boston Triathlon Team a year later. In the past decade she has focused on Ironman, and qualified three times for Kona, setting a PR in 2008 and coming in 11th in her age group. That, my friends, is pretty impressive. She has done several local races this year and has made the podium each time. When training for a typical Ironman, Jen averages around 15 hours of training a week, swimming 2-3 times, biking 3-4 times, and running 3-4 times. These days, she has become more relaxed about training because her time is not always hers with a new (1year old) baby, Shane, in the picture. In the past, if she didn’t get a workout in, she would get stressed. Before races, she got very nervous. But as she has learned, when your child still isn’t sleeping through the night, you aren’t sleeping through the night either so stress about triathlon seems silly.

I asked Jen if she could recall the funniest thing that ever happened to her at a race. At her first Ironman distance race in Florida, she was afraid of getting stung by a jellyfish and put meat tenderizer in her bag just in case she got stung. A volunteer pulled it out and asked her if she needed it. When she said no, the volunteer took out a steak and began to marinate it right there! Ok, that didn’t really happen but she could have if she wanted to because who doesn’t love meat tenderizer? The reality is that I was there during that race cheering on Jen and another friend, and I witnessed what I still today call my funniest moment in triathlon. Jen is nearing the finish. Dave, Jen’s mom, and I are straining to see her when Jen’s mom leans a bit too hard on the fence and it collapses, sending her sprawled out on the ground (don’t worry, that’s not the funny part, and she was ok). She was holding the camera, and looks up to Dave with a pained look, strains to give him the camera and says “Go. Dave. Leave me here. Get picture” in what I can only recount as a very dramatic scene. It was right out of a movie but there was no music except for “Eye of the Tiger” blasting on the sound system - how apropos. So Dave grabbed the camera, ran off, and got the shot, leaving me to provide first aid to Jen’s mom. By first aid I mean I helped her to her feet. All was well and we had a good laugh, and a lesson in what’s really important during your first Ironman!

Jen isn’t done yet – she has a few goals in mind for the future (ask her!) and is thankful to the sport of triathlon for many things, including the lifestyle, training, setting and achieving goals, and the friends she has met through the sport. But at the end of the day, she couldn’t do any of it without the love and support of her husband Dave and her parents. They are always there now when she needs time to train and race (especially now with Shane), and they have always been there.
[If you are interested in writing a Member Spotlight about another BTT member, please contact Laurie.]
Posted by Laurie at 9:45 AM