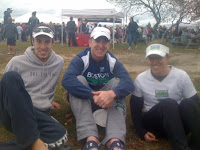 With a 10:30 a.m. race start, I rolled into the overflow parking lot at 9:15 (the RD was very clear that you had to be there by 8:45 if you wanted prime parking but I slept instead).  I got out of my car and was greeted by a young lady who excitedly told me that it was her very first triathlon and she was thrilled.  She actually got me excited about racing.  I wished her luck, offered her a Juli Davenport quote of “just keep moving forward”, hopped on my bike and rode the 1.5 miles to the park.

Even after race packet pick-up, body marking and transition set up, I still had time on my hands so I popped in my headphones and sat down as I can only handle Beyonce and Bruno Mars for so long.  It was pretty crowded with 500 or so racers (mostly triathletes from the Bay State Tri Team) but I looked around for fellow BTTers.  I saw a tweet from Mike Hollywood so knew he was there.  I was pleasantly surprised to run into Jeff Kreher who was doing his first triathlon of the season.

Beyonce was finally turned off and it was time to race.

The race is 1/3 mile ocean swim, 14.7 mile bike and a 5K.  The water temperature was 67 degrees along with windy and choppy race conditions.

Swim:  The swim is point to point and an in-water start.  You walk on rocks to get to the start -- not fun.   It was the usual kicking and bumping but the water was pretty choppy which added to the adventure.  It was also quite shallow and folks were walking.  It was only a third mile swim but I was exhausted running into T1.

Bike:  The race advertised that the bike course was “the most scenic bike course on the planet” but it was less than 15 miles and I didn’t notice.  The course was windy, mostly flat with a couple of minor hills but it was crowded

Since I was in one of the last waves, I was able to finally see BTTers (more than I had expected) on the run course while I was riding back into transition:  Mike, Jeff, Tim Daley, Keith and Michelle Rousseau.

Run:  Out and back run and the return part was shared with the bikers – always a danger.  The run course had a few inclines but nothing major but my legs were aching ( a side affect of Montreal). 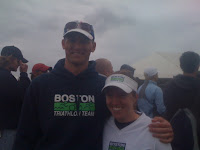 I didn’t know where I was in the standings or notice if I had passed any women in my AG because I was too busy suffering.  I finished the race and happily saw Jeff at the finish and then Mike who also informed me that it was his first triathlon of the season.

BTTers had a good day with Michelle winning her AG, Keith in 3rd and me at the podium (although no podium) as well.  Tim, Jeff and Mike all had great races.  It was a good race day.

Some final notes on my last Tri of the season.  Post race food was pretty good and there were plenty of volunteers.  It took forever for awards but we did receive a nice pint glass (which I broke in the parking lot), a gift certificate to a running company and those funky shoe laces that you do not have tie.

Thanks to Juli for everything as she is retiring from coaching.  Hope to see you all in New Orleans for the 70.3 next April.