Hurricane Irene might have put a damper on some sprits and shut-down races for a few up and down the East Coast, yours truly included, but the blue and green was still seen in many of the races that did take place. Up north in Canada, Amy Robinson Greenwood represented BTT well with a 10th place age group finish in Ironman Canada. While down south in North Carolina, Carolyn Soules took a first place age group podium finish in the Lake Norman Sprint Triathlon, with Jason Soules also having a strong race. In neighboring Virginia, Audrey Perlow continued to rack up those podium finishes taking 2nd place in her age group at the Steve Thompson 8k.

Back here in New England, a few races were squeezed in before Hurricane Irene did its thing. Krista Schepanovsky took on the Andrew J Reed Triathlon in Rhode Island, winning her age group, while over at the Cranberry Sprint Triathlon Pat Dwyer showed he still has it racing as a 40 year old, taking 4th place overall and winning his division We also saw impressive performances by Rachel Saks Aronis winning her division, and by Katie (Blumberg) O'Malley in that race.

Pat gives us some insight into his race: 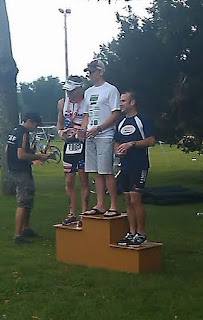 So, last weeekend was my first race of the year and first triathlon since I raced Kona last October. It was also my first race in the 40-44 AG. It was the Cranberry Sprint Triathlon. I was using this as a tune-up for my half ironman next week in Lake George. In some ways, I was more nervous for this race than the half. Not just because it was my first race post surgery, but because you have to go so hard in a sprint (redline the whole way). Also, I had no idea how fast I could run. My running has been improving...but I'm very far off from my normal self. Not to mention, I've barely done any hard running. This race would represent my first sustained "hard" run of the year. I was interested to see how my body would react.

For some reason, I hadn't been sleeping soundly this past week. And Friday night was no exception...in fact, it was even worse. But, I got up at 5am....got my stuff together...and drove down to Lakeville. Upon arriving, I immediately saw my teammate, Kate (Blumberg) O'Malley. It was nice, since I wasn't sure any other teammates were racing. As I walked through to registration, I had to keep my ego in check. I typically go to races like this with the mindset that I'm going to win (not that I always do....but that's how I approach it). Although I seemed to still have the mindset....I wasn't sure the body was going to keep up with the mind on this day. After registering, I got my bike and gear together and headed to transition. I ran into another teammate, Rachel Saks Aronis, who was positioned right next to me in transition. Funny thing is that I was #1044, Rachel was #1045....and Jamie Strain was #1046, but Jamie didn't show. While setting up transition, the race director made the announcement that it was a no-wetsuit swim. Fortunately I brought my speedsuit. When I signed up for this race, I registered as an age-grouper. But, during the week leading into it, I was having second thoughts....and should have signed up for the elite/open division...which, in retrospect, I should have done.

I was in the 5th wave (40+ men). Our gun went off, and I went to the front. I had a really good swim (although I had to navigate through the previous wave of 30+ women). After a very, very short swim, I was first out of the water and into T1. Man, what a shock to the system. I usually run well out of the water....but my legs were dead. I got on my bike and onto the bike course. My shoes were already on my bike, so I started to get my feet in the shoes. I should have looked at the course in advance and waited until the first big downhill to do this. Anyway, I got my first foot in, but the strap came undone as I put my second foot in. After fumbling a few seconds, I just rode with it undone. Not ideal, but not catastrophic either. Being in the 5th wave meant I had many people already on the course....many riding the yellow line. I yelled "on your left" the entire ride. Since it was a 2 loop course, going through the start of the second loop was really congested and I couldn't ride more than 12-14 mph. After finishing the second loop, I headed into T2. I had a much better second transition. Out onto the run course, I had no idea how this was going to go....so I dialed back a little and just tried to run hard. I could tell I didn't have my normal legs....but I was still passing people and running relatively fast. I thought going into this race that I could hold about 6 minute pace....and that's about what I did. I ran the last mile or so pretty hard...and finished strong. Since I was in the 5th wave, I wasn't sure where I finished overall. I figured, after talking with a few people, that I was in the top 5. I was 5th, but wound up 4th after a penalty was issued to one of the elite guys. Oh, and I won the AG by 4-5 minutes. I think I like being the 40+ guy kicking some young ass.

Mixed feelings about this race. I definitely had some hiccups, which is to be expected. But, I wish I would have raced elite so I could have been in the mix. All in all, it was great to get back out there, even though I'm not anywhere near my top form. I'm excited to race again next week.