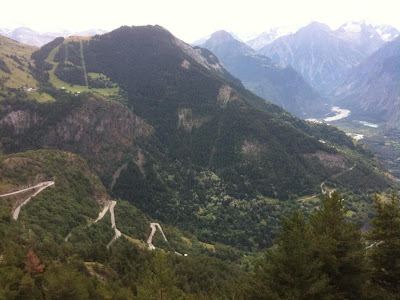 I have to admit this race initially kind of psyched me out once I got there and realized what I had signed up for. It’s not often I stay up at night wondering whether I’m going to finish a race. But it turned out to be a great experience. My best advice is not to ride the course (or do anything) within a few days of the event. And definitely drink the espresso and eat the chocolate croissants at the aide stations.

The race director is a hard core dude who recommends riding to the start 10 miles away from Alpe d’Huez. I admit I took a car (thanks, Lisa) despite the leisurely 9 a.m. start time. The 2.2 K (1.3 mi) swim is in Lac Verney, which is a glacial lake open only once a year strictly for this event. It was rumored that the temp was around 53 degrees, but it turned out to be closer to 58. Not too bad and, unlike Placid, wetsuit legal. Before the swim start, no one was eager to get into the water, and congregated on shore waiting for the gun to go off. Once we got in, things got interesting. There were no buoys to follow for the two-loop swim around a triangular course-- just two sailboats way out in the middle of the lake to mark the turn-around points. Helpful kayakers guided wayward swimmers back on track, since not too many seemed to know where they were going. Once I realized I wasn't going to pass out in the water - and I knew where to go - it made for a better (and shorter) second loop. I could debate the merits of having boats with sharp bows as course markers, but it was picturesque, and I'm sure it made for good video.

The 110 K (66-70 mi) bike takes you to the top of three mountain peaks (“cols”) – ending with the d’Huez climb. The ride starts off with a gradual 15-mile downhill on the main road from the lake at Oisans to Grenoble, where the first climb up to the Col de Grand Serre starts in a picturesque alpine village - and gradually climbs almost as high as the d'Huez (a gain of 3200 feet over 10 miles). I tried to take it easy, but still found myself riding pretty hard for the hour uphill. The top of the Col is a ski resort. It had started raining, so I put on a jacket and gloves before the short and steep descent. The next section was through a mountain pass, which gradually climbed to the top of the second mountain - the Col D'Ornan. It was a nice, winding road through lovely towns and majestic, snow-topped mountains. I was tempted to stop halfway for coffee and a baguette realizing it probably wouldn't impact my bike time too much. The descent back down to the town of Oisans where the D'Huez climb starts was a bit tricky in the rain. I tried to take it easy on the brakes and not skid off the roads, which had no guard rails and overlooked the valley river a few thousand feet directly below. The Alpe d'Huez was as challenging as they say. But a big shout out to Mark and his crew at Landry's. I had put on SRAM 11-32 cassette and long cage derailleur. Previously, I hadn't been too happy with the system’s shifting, but I guess that had a lot to do with the adjustment. I was fairly comfortable up the d'Huez and rode at a pretty high cadence; I passed more than a few people grinding away. No, I wasn't exactly spinning. Yes, I was riding my road bike -- no need for aerobars in the Alps. My Alpe d'Huez split is available on request.

The 13-mile run is around the ski resort at Alpe d'Huez -- three loops through town and then out into the nearby hills. Not exactly a flat course. About half of the course was on a single-track mud and stone path. The other half was on the road with one fairly challenging hill. There was a nice variety of scenery and terrain, and I would have enjoyed some incredible views if it hadn't been foggy and raining. I felt pretty comfortable despite the altitude; running slowly helps. The rain was actually very pleasant on the run, and the crowd in town was great. Nutrition support was good on the run, too, though they did run out of Coke on the third loop (or maybe they were just tired of my bad French).

All in all, it was a great, challenging race. More like doing an ironman than a half. The race definitely favors strong bikers, altitude runners, and those who dope. It’s nice because the half marathon doesn't quite trash your legs. And it was great to be able to race on the same mountain where multiple tour stages have been contested. Theoretically, I would have been able to see the Alpe d'Huez Tour stage had my flight not been delayed by 12 hours. But I was able to see the time trial in Grenoble the next day. And the race date in the middle of week (Wednesday) was helpful to give me time to acclimate. The area is fantastic -- I was able to ride up the Col Galibier (the high point of the Tour this year), which is just 32 miles up the road (I mean 32 miles of climbing.) Just don't count on lovely weather. It was mostly cold and wet the days I was there. The good news is that the South of France is just a few hours away for those craving beaches and nice weather.