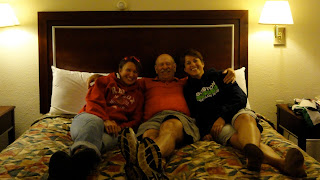 JD: About 4 weeks before the race, I saw a posting by Carrie and Ira, looking for a cyclist for their P-Man Relay Team.  I told them if they got desperate and needed someone, I could swim, but they would have to change their plans for the race, as I cannot bike.  Knowing about my disappointing season (due to injury), they did not hesitate and gave me the swim leg, Ira took the bike and Carrie the run.

We got to our hotel Saturday night and promptly scared all the other hotel guests and the front desk clerk by telling them that we were all staying in the same room, in a king sized bed, sleeping with Ira’s bike as a team solidarity practice.  We thought it was funny…

After a delicious dinner with BTTer’s, we went off to bed, Carrie and I in our palace, Ira and his bike in the “man cave.”
Cool crisp morning, we headed to the beautiful race venue and were greeted by an amazing sunrise over the pond, with steam rising from the water as the transition area and beach came to life.
Swim Leg: 2 loops, 0.6 miles each

The race started, 7:10am for me.  I really wish that I had done a “prep race,” as I was totally out of practice for race day! I had a lofty goal of staying with Laurie D, but that lasted only about 150 yards, then I realized I was in a race and got a little freaked out.  I haven’t done a competitive swim in a year, and this would be my longest ever!  I regained my composure and tried to find a rhythm.  First lap was rather uneventful, ran out and dove back in for the second loop.  This loop had a lot of packs of congestion, so I ended up going wide around most of them, just to keep a steady rhythm, and hopefully not freak out again! I tried to push as hard as I could for the last leg and came out at 32:33.  I was pleased, and hopeful for next season, based on that time.

Then came the hill sprint challenge, or the “run so hard you puke on your teammates” challenge,  as I like to call it.  I didn’t puke, and managed to make it up the steep hill from the beach to transition in 1:09.  After catching my breath, I then had the pleasure of cheering for BTT and FOBTT for the rest of the day, as well as our inspirational final finisher, who crossed the line at about 3:30pm – most impressive!
General thoughts – beautiful race venue, amazing race volunteers and staff, incredible food, and the best teammates and friends a triathlete could ask for!
IS: Teaming up with Jess and Carrie for a relay was a big part of what made this race so great. Plus, the transition placement of all the relay teams put us right next to Laurie, Jay, and FOBTT, Brenda. So race started with great team spirit. We also had a great group of teammates and F’s of BTT who were competing as well.(Special Thanks to Mary Beth and Nicole for cheering us on)

Carrie’s pics capture how beautiful the setting was with the sun coming up over the lake. The beautiful setting, relatively small size of the race made the  whole ambiance of the race feel very relaxed, even though it was a competitive field. I knew Jess would have a great swim having swum with her the week before, and I knew that Carrie was motivated to have a good run. Jess ended up being the fastest BTTer up the killer hill climb from the swim! I started to get worried about letting my team down on the bike, when I noticed the biker from another relay team, brought his trainer and was on it from before the swim even started till just before transitioning into the bike!

It was very relaxing however to not have to worry about swim or run. My goal was to improve on my Timberman Bike time, which I thought I should be able to do without the big hills and saving myself for the run. The course was beautiful and having done it the weekend before with Teammates made it more reasonable. Nice rolling hills through very scenic areas, at times. No really big challenging hills and generally great road conditions. Two loop course with long lollipop “stick.”
Went out at good pace, but eased up a bit too much in middle of race. Felt good last 10 miles and pushed past a good number of riders. Skipped first two water stops, and had about 15 minutes with no water  or Gatorade left. So had to really slow down at last water stop to get two bottles. No big deal. What was most challenging was adapting to great temps after season of extreme hot weather. It was in the low 50’s early in the morning, before the start, so actually started race with arm warmers, which I took off after about 10 miles. Overall perfect weather, well organized ride, and great setting. During the last few miles, I knew had hard it would be for Carrie to wait around for so long before starting run, so pushed to get in and get chip to Carrie with Jess’s help. Took 10 minutes off Timberman time, but not the 20 minutes I hoped for.

Finally, the post race meal and awards ceremony was one of the best I have experienced. They had a beautiful Podium with lots of Hay Bales, pumpkins etc. and did a nice job during the awards ceremony. Great race with great teammates, and overall terrific performance by all BTTers competing. Special kudos to Friends of BTT Brenda, who had a great run, preceded by 7-8 mile run before she started; Laura with terrific time, Andy and Melissa for podiums. Great job.
CM:  I had heard really good things about Pumpkinman, and almost did the relay last year before getting locked out. So when Ira mentioned that he was thinking about doing a relay, I jumped at the chance. Since I was signed up for a marathon on 10/10, Pumpkinman was the perfect time for me to run a half marathon, although I would have much rather have been biking!! As Jess already described, we recruited her, and I was so excited to be able to do a beautiful course with great friends.

However, my legs were not cooperating with me. The nagging injuries that had hurt my Timberman run were not healing. Not that I’m speedy by any means, but I hadn’t been able to get under 10 min miles, and the longest I’d run since Timberman was 7 miles, and that included a lot of walking, stretching, and stopping. I was worried that I might not be able to run 13. I had to pull out of the marathon. But Ira, bless his heart, told me that there was no pressure, and that he didn’t want to replace me. So up to Kittery we went to ruin BTT’s reputation (and enhance Ira’s? lol). I was so nervous the night before, but a great dinner (and a raspberry margarita) with teammates and friends calmed me right down.
Race morning was beautiful, but COLD. I asked Andy Schacht the temp during the middle of the bike, and he told me it was 55 degrees. Plus it was windy, and looked like it might rain. Thankfully, since I had forgotten mine at home, Sue had some arm warmers for me to borrow, even though it meant that Noah would be making fun of me for the rest of the day. Not being used to waiting around so much to start a race, I occupied myself taking pictures of BTT and FOBTT – although some of them were not that happy to see my camera at the top of that hill climb! It was very cool to see Jess charging up the hill, giving it her all after her first swim this season! Although, both Ira and I appreciated you not puking on us J I exchanged the chip to Ira’s ankle, and he was off. Which meant more waiting…
Luckily, Andy is a great announcer, and kept us occupied with trying to name songs and artists for prizes. Laurie won socks for Earth, Wind, and Fire, and Brenda won a pair for James Brown (including dancing like him in transition!). So we went down to the small expo to shop. Once I saw Jay come in to T2, I knew Ira wouldn’t be far behind, and then I started to get really nervous. I’d been on my feet all morning, trying to keep moving to stay warm, and I was hurting. I debated about making one more bathroom pit stop (apparently I’ve developed a reputation: Ira & Jess bet on how many times I’d have to use the portapotty during the race. I’m not exactly sure, but Ira, I think you have to wash Jess’s bikes!), but here comes Ira, and ready or not, I’m off!
The first three miles were mostly downhill, and I went out too fast. I kept looking at my watch and trying to slow down, but my legs seemed to have a mind of there own. I saw Brenda at mile 3, and I was in so much pain, I think I could only grunt at her. And I was so distracted, that I had to ask MB and Sue if I was still on the course! But then, amazingly, almost all the pain went away as soon as I started climbing and finally warmed up. I decided to not look at my watch, and just go by feel, not pushing too hard to ensure I’d finish. I did look however, when I got to the halfway point, and I was at 1:00, which for me, was really good. I took a quick inventory and realized I felt great and just hoped I had some endurance in reserve. It really helped that the course was two out and backs, so I saw friends/teammates 2-4 times, high fiving most of them. Whenever I saw Laura, I knew a turnaround was close. The volunteers on the run, especially at water stops, were awesome. Plus a few QT2ers and Tri Fury guys were really encouraging each time I saw them.
By mile 12, I had nothing left. My legs were still moving out of sheer stubbornness and a desire to get the finisher’s medals and long-sleeve t-shirts for Ira and Jess. Finally I turned up the last hill, then down the chute. I could hear Jess, Ira, Matt and the rest cheering me in, and I think I said something about hoping I didn’t fall on my butt (the chute was really steep, and the grass was wet from the rain that had started during the run). The announcer called “my” name “And here comes Ira Sill- hmmm” gotta love relays! I finished in 2:01 – I think that’s the most evenly paced race I’ve ever done! I was ecstatic. After an amazing turkey dinner, taking the BTT picture on the prettiest podium I’ve seen, closing down the beer tent, and cheering in the final finisher, it was time to pack up the BTT tent and go home. Thanks everyone for a fantastic weekend!
Posted by JorgeM at 9:23 PM