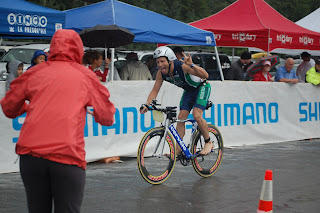 A few short recovery weeks after the Boston Marathon (my first) I resumed my tri training with a focus on Timberman 70.3 as my A race and first Half Iron, along with a few others for fun. My training varied between 12-16 hrs/ week of swim, bike, run and strength workouts and I got all of them in except a swim here and there. Early in the season I did my first century ride and a fun Kancamangus Climb in NH with some BTT friends and then I stuck to the plan of shorter rides & run on weekdays and long bricks and runs on weekends. I tried to use my planned race nutrition on my long bricks and did them all outside despite the heat or rain. We got lucky this year as the weather until now has been great! A little rain or heat beats a 4 hr trainer ride any day!!

By mid-August, I was ready for taper and feeling good! On race morning I was calm and focused, in transition by 5:30 and ready for my 7:55 wave start... after tracking down some extra gels (thanks Jorge)... yes, I meticulously planned my nutrition and packed my bags the night before but didn’t bring my gels for the run, or any cash... dohhhh!

Swim: It was fun to watch the pros go off, and dream of someday being able to swim like that! With 20' to my start I hopped in for a quick swim warm up. The water was warm but the air was chilly and I was glad to have the Sleeveless wet suit. The swim sure did look loooong... I could barely see the last red turn buoy even though they were about 8 feet tall... and are those white caps? Maybe I shouldn’t have skipped those swims! One buoy at a time, that’s all I have to do, and I was actually looking forward to it.

I started on the outside, maybe a little too far out... I kept a steady effort and tried to stay long and efficient and before I knew it I was around that last turn and heading to the water exit arch. I did pass a lot of people on that last few hundred yards so that made me feel good. Having breast/side stroked my first 1/4 mile sprint swim two years ago, I'm pretty satisfied with my swim time... though I know much improvement is possible.

Bike: I felt great coming out of the water and through T1 in 2:24 and ready to kill the bike. My longest bike distance in a race had been 25 miles, so I was not sure what it would feel like to put out a high Z3 effort for that amount of time. I stuck to the plan, mostly, after a good spike at the beginning... the excitement and the early hills got to me! The cool weather helped and by the time I got to the turn around and saw that my average speed was almost 22mph and I was still feeling great, I knew it was going to be a good day, all I had to do was push it through the false flats on the way back and I had it made.

I could have done without the rain on the last long downhill; hitting 44mph in the rain is a little scary! Tip: when it's wet out, check and ride your brakes a little to dry them out BEFORE you need them! I was taking my feet out of the shoes before I knew it and rolling (a bit too fast) up to the dismount line. I could hardly believe how good I felt and I was ready to tackle the run.

Run: The run started out great after a 2:24 T2. I could hardly keep myself from running sub 7's even though my HR was not climbing very high and my legs felt pretty fresh... much more so than any of my long bricks... but then again those rides were 75-80 miles in the heat! So I slowed myself down for the first 5k and then things got a little tough. The course is quite hilly and the last 3 miles where a challenge... but by mile 12 I was hunting down my AG'rs and I passed at least a handful.

One more to pass at the finish line and I almost sprinted right past Chrissie Wellington who was handing out medals. She stopped me and handed me a medal and I gave her a big hug and told her she was awesome! That was the only thing I could think to say, at some point rounding loop one on the run I had heard the announcer say that she won the race! It was a great end to an amazing day.

I didn't even realize until later on that I broke 5 hrs!! One thought that went through my head several times during the day was something I heard from Coach Vic "focus on the execution and results will follow". I did... and it worked! Thanks to everyone who cheered and helped my get there!!