This week's review covers 2 weekends....August 15-16 and August 22-23.
August 15-16 flew a bit under the radar, with no big "multisport" races on the schedule, and with Timberman only a week away. But, that didn't prevent BTT from getting out there...especially Jeff Aronis, who competed in the incredibly difficult Mt. Washington Road (bike) Climb. He did this one week before also competing in Timberman 70.3. Jeff also competed in the Mt. Washington Road (run) race earlier this season. Me thinks Jeff is a glutton for punishment! What's next? Iditarod? Leadville? Badwater? Nice job Jeff! Also competing in a "single" event was Austin Whitman, who took to the water for the 1.7 mile Save the Bay swim in Rhode Island. Also competing in RI was Sasha who took on the Wild Dog Tri. And, lastly, Matt Bergin took a few steps outside his door to compete in the inaugural Urban Epic Triathlon-Boston. Great job everyone!
August 22-23 represented one of BTT's big weekends....w/the Timberman Triathlon Festival on the schedule. In all, BTT had over 25 members racing over the weekend. We also had a big turnout at the tent, which was situated just next transition. The women of BTT were the story on day one, with Rachel Saks and Jess Douglass taking the podium. Rachel, in usual fashion, crushed the field and won her AG and finished 52nd overall. While Jess took home some of Keith Jordan's syrup with a 5th place finish. It's also worth mentioning that Braden Larmon, Ira Sills and Nicole Richer all just missed podium spots. Also, a shout out to Ira who, after suffering an early season crash, competed in his first tri as a member of BTT. On Sunday, we had a sea of blue and green on the course. Unfortunately, the heat and humidity left a lot of it melted on the run course!!! Yes, it was hot! We had 4 podium finishes (3 individual and 1 relay). BTT was led by Trish Weston's 2nd place AG finish (post your results Trish!!!). 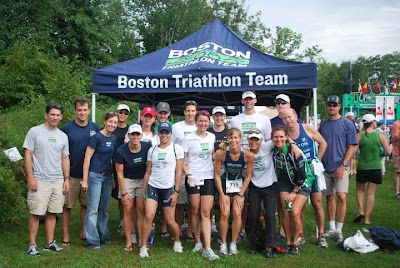 Carolyn Cullings also endured the heat to reach the podium with a 5th place AG finish. And, Pat Dwyer (me) finished 3rd in his AG. The relay team of Brian Kearney, Brian Quigley and Joe O'leary (non btt), dominated the relay field to win easily. Also, just missing out on a podium spot.....and I mean JUST missing out....was Meredith Harjes. Meredith was kind enough to write up a report on her day:
This was my 4th half ironman and my second time at Timberman. I had an awesome time when I raced it in 2007 and was looking forward to doing it again. This was my "A" race for the season, so I was tapered, focused and ready to go. I was nervous about the weather forecast, with all the Thunderstorms up there I just didn't want the swim to be canceled.We got to the race site really early (a few minutes after 4), but it paid off having the car parked right next to the BTT tent, especially so that Dan, Grace, and Baby Ian could have some "AC Time" on what turned out to be a hot day.The race was delayed by about 30 minutes, which probably threw off everyone's nutrition plans, but no big deal. I was in the 9th wave and as we were getting ready to go they mentioned that there were already over a thousand people in the water. They also gave a leader update, I was shocked to hear how far the pros had gotten on the bike course before I had even started the swim. The swim was uneventful, I found 2 other girls in my wave pushing a good pace, and we stuck together like glue for the entire swim. That's the first time I've had an experience like that in the water, and I liked it... good motivation. Seemed like we were a cooperative pack even if there were a few elbow jabs in there. T1, nothing exciting. transition always takes me a long time because I towel off and reapply sunblock. Dan can usually spot me in there pretty easily, he just looks for the cloud of sunblock from my spray can.When I got on the bike the weather was very comfortable. With so many people in front of me, the course was completely packed. The officials seemed like they didn't know what to do. There were just constant groups, it got a little frustrating at times. I had to go faster than I wanted at some times to get around people and slower than I wanted at other times to keep out of the draft. The first 13 miles are quite hilly with the "monstah" hill at mile 10. I was very glad to hit the flats for the next 30 miles. I really enjoyed seeing so many BTTers on the course, but it's never fun to see the blue and green on the side with mechanical issues. Sorry to Tony and Lauren for their issues! Way to rock it for the rest of the race though.Coming into T2 I was very excited and ready to be off the bike. Again toweled off and reapplied the sunblock, grabbed my clif bloks and was off on the run.I loved hearing the huge crowd of spectators at the BTT tent, THANKS for cheering!! Saw a few people taking photos as I was sloshing gatorade all over my face. Feel free to delete those. The first loop felt great, there are SO many aid stations on that course (with lots of great volunteers, they are really amazing). Lots of opportunities to dump water and ice over your head. The double out-and-back is so much fun, inspiring to see the pros cruising into their finish and great seeing BTTers again and again. Thanks everyone for the encouragement!! Heading into the second lap I noticed the heat, my face felt on fire but I still had the chills. The final 3 miles back into transition were tough, the hills felt enormous. By this point the course had become a slalom, I had to keep zigzagging between people as the heat took it's toll and people had begun to walk.The finish line couldn't come fast enough, it's always a little further around the corner than I expect :)Quite amazing to see Chrissie Wellington handing out medals to the finishers with a huge smile on her face. I tried to head over to get my medal from her, but another pro stepped in front and handed one to me. Oh well, she was great too and even complimented BTT for our strong presence!!On a more personal note, I am very glad to have hit my goals and to have PRed on the course. I had a rough couple of months of training and racing and ended up finding out that I have Celiac's disease (an allergy to wheat, basically). I am so glad to have figured that out and am relieved to be making progress in the sport again now that I am taking care of that issue.Thanks again to everyone... this wouldn't be so fun without such a great team.
Also, last year I kept a blog for my family and freinds while I was training for Kona. I posted here and there about my training, etc. But during race week, I posted every day with pictures. Since I qualified again, I'm going to keep the blog again. It was actually pretty fun to do. I recently posted a short Timberman RR. You can check it out HERE.
Happy training!
Pat
Posted by Pat Dwyer at 7:50 AM