August 1-2. This weekend saw many BTTers heading up to Salem for the Witch City Triathlon. In all, 8 members raced (or at least logged their results on the website)...with 2 podium finishes. Austin Whitman led the blue and green w/a top 3 finish overall. While new mom, Nicole Richer got back to her winning ways with a 2nd place AG and 10th overall finish. We also had some near miss podium finishes w/Marybeth Begley (4th), Marissa Solomon (4th) and Kristin Parlangeli (5th) just off the mark. Also worth mentioning...not to be outdone by her husband (Austin), although not a member (yet), Victoria Arrigoni won her AG and finished 5th overall woman. All in all a great day up in Salem. There was even a Rip sighting:)

We also had a smaller BTT contingent head up to the Greenfield Litelife Triathlon...where we had all 3 members racing reach the podium. Jay Higginbottom (3rd), Carolyn Cullings (1st) and Lauren Cullings (2nd) all placed in their respective AGs. Great job!

August 8-9. This weekend saw some highlights and lowlights for BTT. First the highlights. We had a strong contingent head up to Gloucester for the inaugural Gloucester Sprint Triathlon (a tent series race), where Stephen Wall and Madame President (Meredith McHarjes) both reached the podium in their respective AGs.

Rachel Saks Aronis made the solo trip up to Salem to do the Wildfish 1 mile swim, where she won her AG and finished 8th Overall.

Lastly, Matt Pokress finished w/his highest placing ever (2nd overall) in a triathlon at the Lowell YMCA Tri (great job Matt). However, we can't mention Matt's placing without mentioning Bill Reeves. Bill helped Matt's placing by getting smoked by a car on the course while leading the race (we can joke now that Bill is fine...but it was a fairly serious crash). Rumor has it that Matt plans to take Bill out to Helens to thank him! Consolation for Bill, of course, is that he is now up for the O'toole Award at the Banquet!

And, although not an official race... 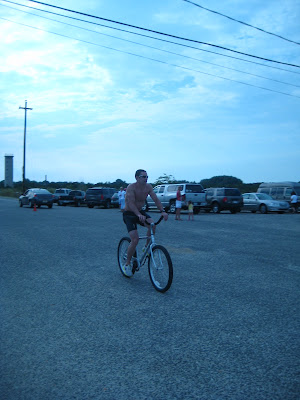 but more of a benefit of sorts, I participated in the inaugural 5-5-5 (5 mile swim, 5 mile beach cruiser bike, 5 mile run) down in Cape May, NJ. It's a grass roots event put on by some freinds of mine to benefit the parents of my buddy Terry who he lost to cancer. Only 25 or so people participated, made up mostly of current and ex-lifeguards. It was a ton of fun. I may see if I can invite a couple BTTers to participate next year.