Many, many results to talk about this edition, now that we're in the thick of the race season. Let's break it down by weekend:

June 13-14- This weekend brought us one of FIRM's bigger races of the season...the Ashland Lions Metro West Triathlon. Madame President, Meredith MacSwan Harjes, led BTT on a very cold and wet day finishing 2nd in her division and 60th overall. Elaine Metcalf also had a solid performance, finishing 3rd in her division and 105th overall. Ed Galante travelled the furthest to race on this weekend....all the way to Key West. Ed competed in the 2 person relay division in the 6 mile race. Way to go Ed. And, Scott Stavely and Molly McAuliffe Smith competed in the Hyannis Sprint 1 Triathlon, with Scott winning his AG and finishing 8th overall. Also, Jess Douglass competed in the Run For Love 5K and Jeff Aronis ran the Lake Placid 1/2 marathon...and during the week, Nicole Kimborowicz competed in the Reggae Ramble.

June 20-21- A couple of big events this weekend....the Harpoon B2B Ride, Patriot Half Ironman and the Mt. Washington Road Race. Since there's too much to report on....I'll just give a big shout out to all those who rode the B2B...and an even bigger shout out to those who volunteered. Lauren Cullings did an amazing job as volunteer coordinator. Although we only had one BTTer competing in the Patriot Half, Jamie Strain went down to the South Shore and kicked some arse....taking 1st in his age group and finishing 2nd overall amateur. Great job Jamie! However, biggest kudos go to Mr. Jeffrey Aronis....for riding the Mt. Washington Road Race. Jeff gives his take on his day:

I have had my eye on this race for a while. It is a lottery entry and if you have the determination, and you get denied three years in a row, they give you an entry. That is how I finally got in. I was planning on running last year, however life got in the way and I was unable to run. Luckily (or un-luckily depending on how you look at it) I was able to defer until this year. The timing wasn’t perfect (it fell during my last heavy week of IM Swiss training) but I wasn’t going to pass up the chance to “run” the rockpile. A few years back I participated in the Mt. Washington Bicycle Hill Climb, so I had an idea of what the road held. 7.6 miles, over 5,000 feet of climbing, dirt sections, wind, rain; basically, an Achilles nightmare. But at least this time I would be on two feet and not balancing on a bike on a 15% grade riding into 60 mph gusts. Logistics. Once you get picked, the website offers all the information you need as far as getting ready for, getting to, and getting down the mountain (getting up is up to you). 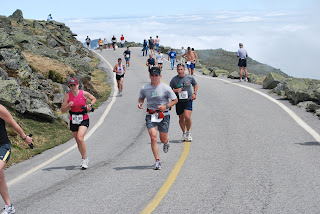 The base of the mountain is race central, providing parking, organization of cars going to the top (if you want to run down, you can) and the main tent, with number pick-up, pre-race videos of past races (and a real time view of the world record for a car driving up the access road; just under 7 minutes) and the location of the post race lunch. I was surprised to see so many team tents set up in the field near the main tent (possible BTT tent series race next year???) The website requests that all cars heading to the top be in line by 9 am. But they hold the road open until 9:30. The race starts slightly back from the first (and only, haha) climb of the day, and a loud cannon shot (the first 100 yards or so are actually down hill) sent us on our way. With over 900 participants, it is a self seeding type of race, but your mile pacing is very different. The winner this year came in just under an hour (which got him an extra $500), which equates to 7:54 miles (which is FLYING by this race standards).
Race day started cloudy and slightly humid. Clouds hung over most of the surrounding mountains and I started to have flash backs of the bike climb those years ago (see my old race report on the BTT website). Along with the initial weather, another similarity in both races was how quickly everyone seems to go into oxygen debt. There are no breaks on this climb, so the only way to settle down your heart rate was to walk. But even that was strenuous. At times walkers kept even pace with runners. And throughout the race, as you took walk breaks, runners would slowly trot by you, only to stop a few yards ahead. And once you started running again, you would pass them at the same slow pace. The first half of the race is within the tree line. You do get some good views of the surrounding valleys not long into the race. But this year we were into the clouds within the first 2 miles. Visibility dropped to about 20 – 30 yards, but that didn’t really matter. It was at this point you start to question whether this race was such a good idea. One thing I tried to concentrate on was making sure I wasn’t running on my toes. Running up hill for this long can really do a number on your calves. I had done a fair amount of running training for IM, but no long hill specific training. So I didn’t want to take the chance of a calf strain. I hit the half way point in just over 50 minutes and my legs still felt pretty fresh. But the next section, where the road turns to dirt, really started taking a toll on my quads. This section averages 15% grade and I began walking a little more and tried to really land on my whole foot, using the upper leg muscles to push me forward. We were still in the clouds but luckily there was no wind or rain (definitely not normal for this place). As we pushed through the later miles, I began to notice something I have never seen before this high on the mountain; my shadow. As we approached the last mile we broke out of the clouds and emerged to a blue sky. Although only the tops of a few peaks were visible, we could see the tops of the clouds for miles. It made for an amazing view as we finished up the last few switchbacks (and the last one is a brutal 22% grade). We got to hang out at the top for 30 minutes or so, until the road opened up to cars to drive back down (first cars can go down at noon). Back at base, we searched out the girl selling “The Driver of This Car Ran Mt. Washington” bumper stickers and I slapped mine on before we left. Overall, this race is very well organized, the volunteers were great (many on the race course at the water stops along the way), and the venue is unlike anything in the world. It is very unlikely you will have a 7.6 mile “PR” here, but the satisfaction of getting through the race is reward enough. Hopefully the weather will co-operate in August when I tackle the bicycle climb for a second time (and I hopefully get that other bumper sticker).

And, lastly, how could we forget the dominant BTT showing up at Webster Lake, on another cold and rainy day...with Matt Pokress leading with way with an age group win and a 6th place overall. Not to be outdone, Lauren Cullings and Jess Douglass followed Matt with a 2nd and 3rd place, respectively in their age groups. Way to go guys!

Also, I recieved a really nice race report from rookie, Mike Williams...who spent a good amount of time with his article. However, Mike forgot to do one very important thing....enter his results on the BTT website. So, the question is....did he really race?:) I guess we'll have to wait and see if his results get posted....so I can share his report with you! Sorry Mike. I have to dish out some tough love once in a while....