Well, it's been a couple of weeks since the last W.I.R., and we have many results to report! Rookie Steven Wall has been on a tear the last few weeks, competing in the Essex County Velo TT Series on May 27th and June 10th, which is held in Hamilton (is that even considered part of MA?). Steven also took the podium at Ludlow (FIRM) with a 3rd place AG finish. The younger of the Haynes Sisters, Regina O'Toole, continued her post-Kona stealth mode by winning the Spring Fling Triathlon in Tyngsboro (again...is that really considered MA?). Krista Schepanovsky (ed. note: I swear I have to look at the spelling of her name at least 3 times before I get it right!) took her long distance running skills to Pineland Farms again for a short 50 mile jaunt. Rumor has it that during her 9+ hour run, she saw a wild Woody squatting in the woods....but it may have been dehydration setting in! And, Jay Higginbottom and Nicole Kimborowicz ran the Get Your Ya Yas Out on the Charlesriver. Lastly, Brian Quigley finished first overall (Cat4) at the Connecticut Stage Race (ed. note: Geeze Bri....with all that road riding, you'd think your handling skills would be picture perfect;)
Now, onto Mooseman....our first big ("enhanced") tent race of the year. First of all, thanks to all that participated. It was a fun weekend. It also was a precursor to Timberman, which I fully expect to be an even bigger showing. 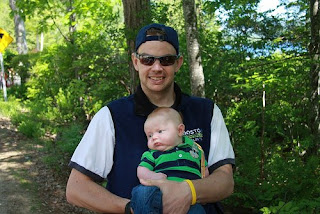 We had a huge turnout for the Olympic Distance Race. 17 BTTers in all (too many to mention). I believe we had 6 podium finished (although not everyone that reached the podium has posted their results!!!!). Pat Dwyer (me), Jorge Martinez, Rachel Saks, Trish Weston, Janice Biederman and Laurie Damianos. Rumor has it that Jorge (aka Speedy Gonzalez) is doing a reverse acclimatization, so he can get used to the cold temps of NH. That way he won't lose huge chunks of time putting on his winter jacket in transition next time. We also had a first place relay with DJ Brip Kearney, Quigley, and Noah Manacas....despite Quigley crashing. Brian, inquiring minds want to know how you run into the back of someone on the bike?


For the Half, we had 9 BTTers competing in the full and 4 competing in the Aquabike. In a very competitive race, we had many solid finishing times (many who will go on to kick some arse at LP). However, our lone podium finish was Matt Pokress...who just seems to have a knack for 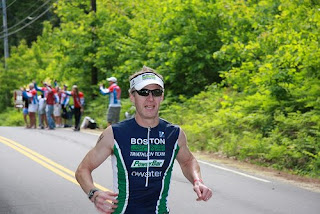 those NH hills. On a side note, Quigley came back the day after his crash to have a solid half (congrats Bri). Also, Joe Kurtz...who had the top overall swim in the half, crashed during the bike. Now, we hope that this was just bad luck...and had nothing to do with lingering aftermath from his other crash in NH during training weekend! BTW, there's no truth the rumor that he's intentionally crashing so he can justify a new bike purchase (sorry Vautour!). Speaking of Mark Vautour....it was great to see our Landry's rep out on the half course. He had a solid race. Meghan Kilroy, who will be doing her first ironman in LP in a month gives us her take on the day (as for the picture....we're not sure what she's doing since you're not supposed to mount or dismount in the transition area!):


This was my first time up at Mooseman and I will definitely be back. It was well run with tons of aid stations, a great course, the temperature this year was ideal for racing and there were tons of BTTers and friends up there. My only regret is that I didn't get up there until Saturday afternoon and missed cheering for everyone racing the olympic distance; in the future I'll definitely make a whole weekend of it. My 'A' race this year is Lake Placid so Mooseman was a training race for me, and my second ever half iron. Earlier in the year, given the volume of training I was doing, I was sure I would definitely improve on my 1/2 iron time, but I started having knee pain in early May (a chronic problem). The doctors suggested no long runs, so I hadn't run longer than 6 since May 3rd. I'd also had only two 56+ mile rides since that date with pain at the end of both rides. So my confidence level going into the race was low, and in my mind this race would tell me whether or not Placid was still an option.The swim: The water was cold as the racers from the day before had warned me, but cold early morning 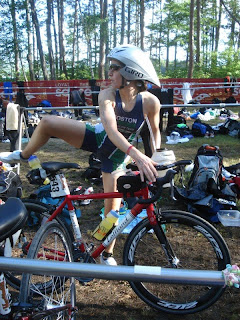 Walden swims were enough to prepare for it. I doubt I'll ever get used to the mess of the mass start but I survived a blow to the head and someone using my shoulder to propel herself forward (which as common as it is I think is against the rules?) and it was all good after that.T1: Brief moment of panic as I was certain my shorts had come off with my wetsuit. Luckily I was wrong since nudity results in a time penalty! ;) Then the paparazzi (Ed) came by all excited that I had improved on my swim and distracted me enough that I actually started to mount my bike in the transition area (see attached photo). I gave him a hard time for chatting me up in transition, but starting the bike (at the actual mount point) with his words of encouragement was really helpful.The bike: My goal here was to avoid pain and save my legs for my first long run in a while. The course has got some hills. So I popped it into the granny ring on the hills, let people pass me, kept my cadence up throughout the course and didn't worry about time. It worked - no pain. My other goal was to try "The Pee", but I'll spare you the details. It was great seeing so many BTTers on the course and Alex from our sponsor Marathon Physical Therapy was there as well.T2: The paparazzi had now grown to include Scott Kleekamp. Some comedy here, but no flubs.The run: This started with a stop at the porta john, my first ever stop during a race since I actually drank during this one, and I have to say I preferred that over my attempt at "The Pee". The run, like the bike, is not flat. It was really helpful hearing volunteers and spectators cheering us on. Around the 6 mile mark I started to feel some knee pain, but I think it was in my head since I hadn't been running past that distance, because shortly after that is when I came upon a SLEW of BTTers shouting my name on both sides of the road and forgot all about it and finished the second half so I could get to the enhanced BTT tent setup to celebrate!Weeks earlier when I was limping in and out of the pool with my pull buoy, I wouldn't have believed I'd be sprinting past the BTT tent at Mooseman hearing the announcer say, 'now here's a strong finish...Meghan Kilroy of Newton, Massachusetts!' I'm hoping this means that hearing 'You are an Ironman!' at the end of my next race isn't as impossible as it seems either!


We also had 2 relay team in the half. Our teams went first and second overall. 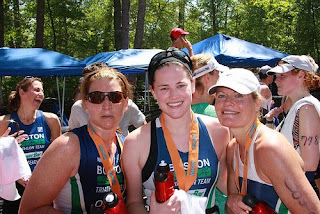 There was much smack talk between "Team Galante" (Ed Galante, Scott Kleecamp, and Lauren Cullings) and the "Boston Triathlon Team" (Rachel Saks-Aronis, Cort Cramer and Pat Dwyer), but in the end, Team BTT (aka the Dream Team) put the smack talk to rest and opened up a vat of whoop ass on everyone....winning by over 30 minutes, in what may be a Mooseman record of 4:09. Pictures from the weekend (compliments of Grace Felos) can be found HERE.
Posted by Pat Dwyer at 7:12 AM