Yes, I'm posting multiple weeks here, since I've been too busy to post. Sorry! Anyway...there's a lot to get to.....so we'll break it down by weekend:
May 9-10- We had a big turnout in my home state of New Jersey for the Devilman sprint and half ironman. In all (according to the BTT results page), we had 6 racers. Nancy Arena competed in the sprint and finished 8th overall female. In the half, Mary Beth Begley, Michelle Riordan Quigley (MRQ), Jeff Aronis and Jamie Strain all had solid performances, with Jamie finishing 10th OA and MRQ finishing 11th OA female. MRQ's counterpart, BPQ, who raced, but pulled out with an injury, gives us his take on the day:
My day was a success (sort of). The goal was to treat the race as a long training day, guage my fitness and see if I could execute on my race plan. Thought I'd share... Swim: Last year Coach Rich at Minuteman Masters had my 1/2 Iron swim under 30 min, but given my lack of pool time I expected to be slower. Goal was to not go too hard, get out of the water in under 35 min and be ready to bike. I went easy from the gun and my stroke felt comfortable. Was sighting well and worked my way from feet to feet, but saw a bit more open water than I probably should have. I got out of the water in 32:57 and felt good going into T1 at about 15th place. Bike: Deliberately went out easy, took some water to calm my stomach and settled in right away. Aimed for 250-260 watts, but found my comfort zone at 230-240 so I decided to be conservative and keep it there. Not sure if that was due to my FTP being a bit lower in my aero position, or if I just didn't have great legs (bad taper, poor sleep, too much time in the car the day before, blah-blah-blah). In any case felt good in my bars at that power. I took in 2 bottles of gatorade/heed and 2 bottles of water. 2 Gels and 1 Clifbar. Total calories ~600-700. The course was a little long and waaay more technical than they advertised. Lots of rollers, false flats and 90 degree turns. I used my brakes more yesterday than in any other triathlon I've ever done. I stayed tucked into my bars as much as possible and picked off a half dozen riders. Came into T2 in 2:30:05 (22.8 mph) with the 3rd fastest bike split on the day in 5th place overall. Run: My Polar died about 3 minutes before the swim start (I HATE POLAR!), so I raced without a watch and couldn't use anything other than RPE to pace on the run. I went out easy repeating "run within yourself, run within yourself..." over and over in my head to avoid my usual mistake of going hard too early. I was passed by one runner right away and another at mile 3, putting me in 7th overall. I let them go because they were moving (!) and I needed to run my own race. At mile 5 I was closing on the guy ahead of me and there was still no one within sight behind me. I picked him off just after the turn around at mile 6 and he looked like he was suffering. My legs were good, but at that point my hip flexor was starting to get very painful. I decided to go until 7 and then shut it down. Being able to build miles and train this week was more important than gutting out a finish. Just guessing, but I think I was moving at around 7:20's... I probably would have faded a bit (due to heat/humidity) and finished around 1:38ish (???)
Despite DNFing, it was a very successful day. Takeaway Lessons:
- Swim more!!
- I definitely need to hydrate more and work in salt tabs. Especially on humid days
- Load up on the Ibuprofen pre-race and on the run to keep hip inflamation down
- Race pace power needs to be re-calibrated for 1/2 iron distance
- Get a Garmin.
This weekend also presented a BTT Tent Series Race....the Hopkington Season Opener, Du and Tri. We also had a great turnout there with 5 racing the Tri and 2 racing the Du. In the Tri, Andrew Schweihs, Jay Higginbottom, Brett Johnston, Stacy Sucholdolski and Kate Blumberg represented BTT well, with Andrew and Kate both finishing 5th in their respective AGs. While, Sasha Dass and Mary Wrin both tackled the Du (sorry Brady...post your results or you didn't race!). The course for both races was very windy. Sasha gives us her take on the day:
This was my first big race of the year. My goal was to finish strong and feel good, which I did! The first run felt great, but I held back quite a bit to save for the ride and second run. The ride 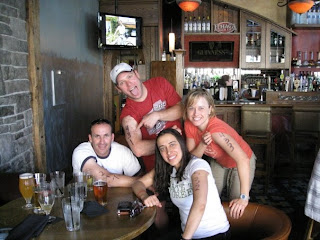 was tough. High winds and a very hilly course made for slow going -- I could have sworn my name was "on your left". Max Performance did a great job organizing and keeping people safe and entertained, and having the course in a state park made for some pretty scenery. It was wonderful to see so many BTT'ers competing. Shout outs to Dave Mak, MaryBeth Begley, Mark Vautour, and Juli and Matt Davenport for all their encouragement. FoBTT Noah Manacas made a superb showing placing 2nd in his age group - awesome job Noah! Shaun Brady also put in a great showing, but I don't want to steal his thunder (Ed Note- go ahead and steal it. He didn't post his results, so my question is....did he actually race?).
May 15-17- Not too many people raced this weekend due to the fact that it was training weekend up at Waterville Valley in NH. However, the ever elusive Adnan Khera placed 5th in his AG at the Tempe International Triathlon in Arizona. Also, after a day of getting abused by Matt Pokress on the bike, witnessing Joe Kurtz's and Jeff Krehers' bloody antics, and well, just having to be around Brady, I raced the Black Bear Sprint Duathlon up at Waterville Valley, where I finished second overall. If I can offer one word of advice...don't race a duathlon the day after a brutal 100+ mile ride! My legs were screaming going over the speed bumps;)
Although I hear that Jeff Aronis is writing up a report about his ride up at Training Weekend (which we'll post next time), no one else gave me a report on the weekend. So, here's the writeup: For those that were there, you know how hard the training days were and how fun the nights were. For those that were not there....well, I guess you don't!!!
-P
Posted by Pat Dwyer at 7:29 AM