Okay....lots to catch up on. We've had a lot of racing over the last few weeks, including the Boston Marathon. We'll start there....we had 4 BTTers out there on the marathon course this past Monday (Lauren Cullings, Brett Johnston, Kate Blumberg and Evan Israelson). Everyone had a solid day, on a day with deceivingly tough conditions, with Lauren leading the way with an impressive 3:25. Hopefully we'll get some race reports from these folks for the next posting. Last weekend was also the Wrentham Duathlon....the unofficial start to the multisport season in New England. Both Steve Sian and Peter Jenson trekked out to outlet country for some running, biking and shopping. Rumor has it (according to Facebook) that our Prez, Meredith, also raced. But we can't confirm since she hasn't posted her results:) (we'll give her a pass on this one!). Lastly, Jess Douglass headed down to Boyston Street on Sunday for the BAA 5k. Jess registered a 22:30 at the newly added event.

Catching up with some past results: A couple of weeks ago, I (pat dwyer) ran the Merrimack River Trail Run (10 Miles). Trail racing is very tough, but very fun. Try one if you get a chance. I 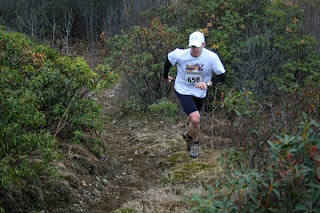 could have sworn I saw long time member Jeff Aronis out on the course. But, his results weren't posted on the BTT website....so maybe I was imagining things!!! We also had some members racing the Marathon Sports Cambridge City 5 Miler, as Jay Higginbottom and Steve Sian went 35:10 and 47:58, respectively. And Ali Winslow hit the South Shore for the Cohasset Road Race By The Sea (10K).

Finally, several weeks ago (yes, I'm behind on this!), Kate Blumberg ran Doyles Emerald Necklace 5 Miler on March 5 and Jamie Strain made a pit stop in Miami for the Nautica South Beach Tri. Jamie Reports for us...

The South Beach tri was something that came about because we had a lay-over in Miami after a trip to Belize with my girlfriend. After a week spent exploring ruins, scuba diving, and relaxing (drinking), it was a bit tough to think of doing a tri. But I guess the rest (and fruity rum drinks) worked out well. Despite the hot weather and borrowed bike from my brother, it was really fun to swim off of South Beach, to ride the closed highways of Miami, and to run on the boardwalk. I thought the race was well run and although I wouldn't go out of my way to do it again, it was a nice start to the season.

Also, congrats to Jeff Kreher for winning the BTT Tourney Challenge. From what I could see, most of us playing were challenged! Great job to all of the new members who are really out there in force on the racing scene. But...save your energy...BTT TW is right around the corner!
Posted by Pat Dwyer at 6:59 AM