We think this is a record....longest distance for the shortest race! A few weeks ago, Jeff and Rachel traveled to Tahiti to take on the Fenua 5.3K road race (oh, they were also there on their honeymoon!). They were gracious enough to give us a race report:

As we planned our honeymoon in French Polynesia, we saw that the Tahiti marathon, ½ marathon, and 5km (or 5.3k as we later learned!) fun run would take place on the island of Moorea while we were there. Moorea is ~12 miles northwest of Tahiti, and is the epitome of what you’d picture an island in the South Pacific to be.

Signing Up
We tried to sign up via the website before we left, but it lacked key information… um, like how to sign up in a method other than bringing a check by the race HQs before race day (no race day sign ups). So, we decided to wing it, and managed to find out about a free athlete bus that took us from some shops near our hotel to registration and the pasta party (we passed after seeing more flies than athletes buzzing around the food).

The race site was on a public beach area that was really beautiful, with a picturesque view of Tahiti. Like most races we have been to, there were sponsor banners, places to sit under a tent, a stage for the band to play, a podium for the awards the next day, and a finish line being constructed (complete with 2 giant pineapples). Jeff had considered doing the 1/2 marathon, but after we learned the start time was 5am, with bus pick up at 3 am, that idea quickly changed to doing the 5k (hey, we are on vacation after all… and you think that’s early, if you are ever planning doing this race be forewarned that the marathon starts at 4:30am!). After some language issues (anyone know how to say “We’d like to register for the 5k” in Tahitian?), we got ourselves signed up for the race that would take place the next day at a more reasonable hour of 8:30am.

After taking the local bus back (which was a story in and of itself… hint: it’s called LeTruck and it’s a flat bed truck with benches), the driver let us know that we could catch the 6:30 am local bus to take us down to the start (which was a better option than the 3 am race bus).

Race Morning
We awoke to some roosters (no, really… there are lots of them that roam the island and make their presence known in the mornings), got our stuff together, had a quick bite and made it out to the road to catch the local bus. It got crowded with locals as we approached the race site, and as we headed to the race start, we began to see the marathoners on the course (the road isn’t closed for the race). Both the marathon and semi-marathon followed an out and back course on the only real road that follows the perimeter of the island. Even at 7 am, you could tell the temps and humidity was taking its toll on the runners. The water stops were set up in full Polynesian style fully decorated with plenty of flowers, fruit and water.

The race village was busy with folks finishing, runners getting ready for the 5K, music playing, and a Polynesian announcer greeting finishers at the finish line. We dropped our bags at the bag drop, and did an easy 10 min jog over to the race start. Among the approximately 150 runners, we met a few Yanks at the start and chatted with them as the sun rose higher and the temps warmed. Everyone seemed to be huddled in one of two patches of shade. Right before 8:30, we gathered at the spray-painted start line and waited for the gun. We had no idea how we’d feel once we started running (it was already 60 degrees warmer than what we had been accustomed to back in Boston) and just figured we’d just wing it. The gun went off and we both (surprisingly) hit a good pace.

The course ran on local roads around the airport, with an initial turn through the local golf course. Most of the run was on dirt roads, which was much better on the legs. The last 30 meters had you turn off the dirt road and onto the beach to the finish. The runners ranged in age but there were a bunch of younger islanders taking on this race (teens and younger); some wearing team shirts, others in baggy shorts, and a few in bare feet.

We both experienced similar things during the race… At about 7-8 minutes into the race, we realized there were no km markers. At about 10-11 minutes in, we were each enjoying the music coming from a boom box a kid carried on his dirt bike as he and 2 others paced his friend (is pacing legal in Polynesia?). At 12-13 minutes there was a water stop (hooray!) but it was one of those days where we got more relief from dumping the warm water over our head than drinking. At 15-16 minutes we managed to push ourselves to run faster to pass a kid on his moped, which he used to pace his buddy (fumes weren’t helping our game at this point; we know we shouldn’t complain, but did we mention it was reeeeally hot?). There were a few people cheering their friends along the way, and we had each found our groove and ran faster than we had planned. We both finished in good times, with Rachel taking 1st overall woman by a few seconds and Jeff taking a very respectable 19th overall (in the “with shoes” category). 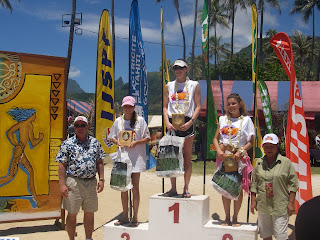 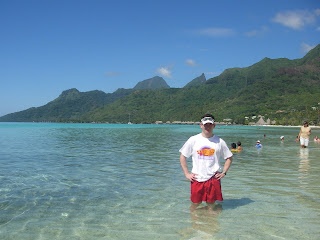 Some things in racing are international. The award ceremony was for all of the races and after waiting it out for Rachel to receive her award, we missed the athlete bus back to our hotel. This lead to another adventure of getting back which is a story for another day…. So, if you find yourself in this part of the world, we recommend this 5.2k run. As with most races, there are still some kinks to be ironed out, but all in all the spirit was there as was the French Polynesian touch.
Posted by Dwyer & Associates at 7:45 PM