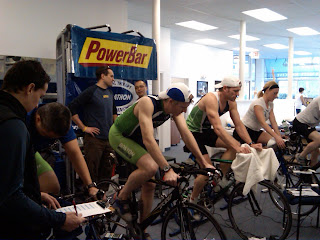 This past week didn't see too many BTTers in the race results. But, it did see a number of people participate in Juli Davenport's LT Testing at Marathon Sports on Saturday. While Juli was testing athletes on the bike, Kathryn Cunningham of Marathon PT was testing runners on the treadmill. A big thanks must go out to Marathon for being such gracious hosts for the event. Also, thanks to Laura Brink, Mat Davenport, Jorge Martinez and Brian Kearney for volunteering their assistance during the testing. And, the biggest thanks must go out to Juli for coming all the way from Colorado to put on the event (seriously...this was an unscheduled trip). It was a great turnout! 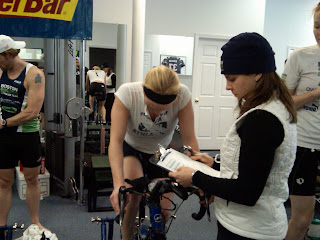 On a side note, there were a few last minute cancellations. Those of you that cancelled, please consider sending Juli the $25 fee since it was too late to fill your spots. And, the money was used to subsidize Juli's plane ticket.

We had 2 BTTers tackling half marathon distances this past weekend...and travelling to do so. Marybeth Begley headed up to New Hampshire to run the Hampton Half Marathon. On her way back to Boston, Marybeth was giving racing tips to the Kenyan winner of the race...who she drove back to South Station. On a more serious note, Marybeth notes about her conversation with the young (or old) runner:
He only does races if there is $ involved. He won with a 1:13 which he said was slow, he did a half 2 weeks ago at 1:06. He does a lot of 5Ks because he can win cash and if he breaks the course record he gets extra, he does the 5Ks in 14 minutes. He lives with other Kenyans and they all run with the Westchester Track Club. They win the money and send most of it back home to help support their families. I know some of the big African running names but didn't realize that there was this whole world of folks who can actually make a living out of running and support families back in Africa. (ed note.- I used to run quite a bit with the Kenyan Fila Runners when they used to base their US camp in Boston. If they won a big race, it was like they won the lottery in Kenya).
Our other BTTer who raced was none other than Trish, who has decided to just tear up the race circuit this year! Trish went down to the Sunshine State to race the Sarasota Half Marathon. Actually, Trish's main purpose was to provide support to her sister. But, I'll let Trish tell the story:
My sister, who was pushing 300 pounds in July, was so inspired by the athletes at Lake Placid that she signed up for a distance event herself. There is a crazy energy at Lake Placid - seeing all the athletes finish the race makes you want to do something equally as amazing. As the story goes, Maureen signed up for Team in Training and the Sarasota 1/2 Marathon. She trained faithfully with the coach and made some amazing transformations to her health and appearance. She is now hooked on being active and is dragging her people into her new found life style. 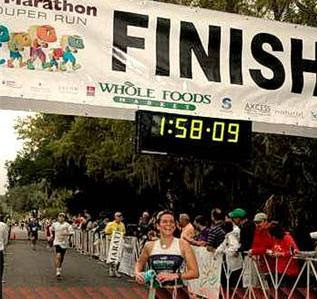 My race.... I didn't train for it. Although I did run hard and actually had a good smart race. They had pacers, I was behind the 2- hour balloon for most of the race. I almost passed it at mile 6, but was set back by a couple of hills (which suck the life out of me). I finally caught up to the 2-hour pacer with 2 miles to go and had a strong finish. The weather was a little humid for my liking, but I can't complain about 65-70 degree race conditions.
NEXT UP: Hyannis Marathon, Half Marathon, and 10K (Tent Series Event).
Posted by Pat Dwyer at 8:48 PM