Week In Review: Year of the helmet

Sorry guys... this is going to be loooong! BTT was out in 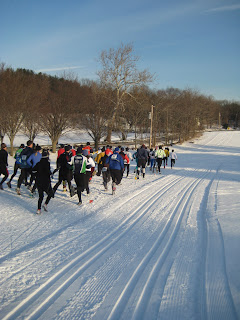 force this past weekend... indoors, outdoors, snow, slush, sun, you name it. Apparently a couple BTTers (Rachel and Jeff) ran a 5K in Tahiti (but, we'll wait until they get back to post about that race). Our weekend began on Saturday at the Massachusetts Winter Triathlon, held at the Weston Ski Track. Although the weather called for 45 degree temps, they were no where near that high at 8am in the morning. We had a good team turnout, with 6 individuals racing, and one relay team... all of whom were competing in their first winter triathlon. The course was great because we went by the transition area (and each other) several times... and were able to root each other on. We all made some rookie mistakes out there... from our clothing to our tire pressure. Unfortunately for Pete Jenson and Trish (yes, we'll be making fun of you all year!), they wore their mistakes on their heads! At least, we think it was a mistake. For all we know, they could have thought the last leg was downhill skiing! Regardless, they both finished strong 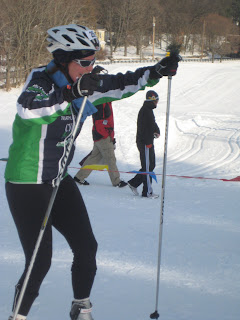 and had a great time (I don't think the helmet affect their aerodynamics too much! Thankfully, the race director doesn't enforce too many rules during this race, as we had a few mishaps. After the bike portion, Big Jim Sweeney ran out of transition with his skis... and kept running... and running... to the top of the hill! Not sure if that was legal... smart? yes... legal? we're still waiting on the verdict! The tough guy award goes to Mark Pelletier, who tearing up the bike course so much that he ripped the chain clean off his bike (ok, it broke). Anyway, rather than quit, Mark ran (through the snow) with his bike. When he reached transition, he borrowed a bike from a competitor who had just finished the bike leg... and then Mark was off to finish the race. So, next time you're thinking about dropping out of a race, think about that!!! As for the rest of us, I had a solid run, followed by a slower bike, followed by a slower ski (I just kept going backwards)... and finished 10th. I did my best to hold off uber skier, John Wozny. Apparently, when he wasn't dreaming of pulling out teeth (he's a dentist), he was a competitive skate skier. It was good to see the good doctor out racing... but he's since gone back into hibernation. As for our relay team, they finished first overall. But, I'll let them tell their own story....

(Sasha) The idea of a winter multisport event was new to me: run, bike, ski - all in the snow? Never having run in the snow on 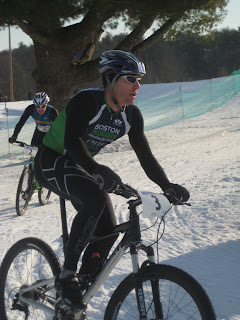 purpose, I was taken with the idea. I considered doing the whole thing on my own. But when Pat posted a call for BTT to field a relay team I replied, game for the run. He answered back about thirty minutes later. Matt Pokress would bike, Laurie Damianos would ski. I would run. As my first event wearing blue and green, I had one goal: do not embarrass myself. I emailed Matt and Laurie to coordinate. Laurie's first email said something like, "I hope you guys aren't expecting me to be good." I replied, "don't worry, my knee is injured, just looking to have fun". Matt completed the sentiments with "I'm not very agile on a MTB... oh, and by the way, I've never ridden in the snow." Perfect. The forecast called for 45F and sunny, but at 7:30am out on the course, it was a chilly 15F. The course, at the Weston Ski Track, was nicely laid out. The run course doubled as the bike course, with the ski winding around the center. The snow was packed down nicely, but was starting to get rutty and soft as the temperatures rose. I set out with the others, and quickly fell behind to the back. Struggling to catch my breath in the cold, I started to panic. Would I finish? Then Trish passed me shouting "don't worry, remember you're here to have fun!" And with those kind words, I relaxed and fell into a rhythm. About 27 minutes later, I entered the transition area, handing over the "baton" to Matt who I knew would have to play catch up to the rest of the field who was already on their bikes. And did he ever catch up! But I'll let him tell the story. (Take it away Matt...)

(Matt) As mentioned earlier, I am not a big fan of my MTB. I have used it so infrequently over the past 13 years that it has needed no maintenance (somewhere Chris Li is cringing). I like cycling to be a mindless exercise at a constant effort. Racing fat tires on snow (or dirt, for that matter) requires concentration and short surges of maximum power. I tried two warm up loops on the course to get a feel for it prior to the start. I had no real problems with traction. At my last race even my hands got sun burned. Would this one cause frostbite to those same fingers? Sasha came in and handed the race belt (with number) to me. I think one of the biggest changes for a race like this is transition. We three didn't need to change shoes, but the simple act of putting the race belt on was surprisingly awkward with gloves. Those who did the whole race struggled, I'm sure, to don and doff the helmets and shoes. Some chose to wear their helmets beyond T2. I hit it as hard as I could after mounting the bike. This whole ordeal would be over quickly, and nothing needed to be saved for the run. The bike course was three loops of the same course used by the runners. All those footsteps and tire tracks really changed the composition of the surface, and it was much looser than during the warm up loops. I must have been white knuckling the handlebars the whole time because my fingers stayed warm. I also can't recall ever using the brakes. The rolling resistance was high enough that I could just freewheel to scrub off speed. I passed a lot of people, but on a three-loop course I really had no idea what was going on. I stayed upright throughout the 7.5K, only clipping out once. It felt like a solid effort as I rolled into T2. At a summer triathlon I feel the events, in order of importance, are swim-bike-run. A good run usually beats a good bike, and a good swim is rarely remembered beyond T1 (sorry swimmers). Winter tri puts running behind the other two events because of their technical demands. Running on snow is not all that different than running on the road. It is slower, but I bet the first guys into T1 at this race would also be the first in a local 5K. The bike, as I already described, rewards experience handling and riding off road and on loose surfaces. Nordic skiing, like all highly technical endurance events, confers a massive speed advantage to those who know what they are doing. Our hopes ultimately hung on Laurie's XC skills. 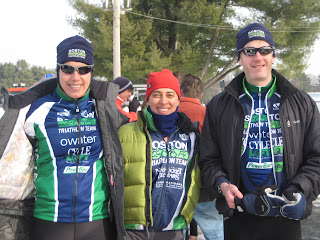 (Laurie) Wow. That was quite the build up. I'm glad they did not tell me that before I headed out! We had all made our disclaimers before the race, and this was supposed to be fun and low key, but somehow I found myself with the all too familiar butterflies in my stomach and nerve-induced runs to the porta-potty. (In mid-teen degree weather, making yellow snow was not an option.) It was cold. No, it was frigid. I was wearing a parka over my BTT jersey, a balaclava on my head, and lobster gloves on my hands. I had to keep jumping up and down just to keep the feeling in my toes while I waited my turn. When Sasha and I saw Matt crest the last hill, we ran over to await his fast approach. I threw off my jacket, strapped into my poles, grabbed my skis, and let Sasha transfer the race belt/number from Matt to me. The race participants were nicely spread out by this time, so I had no trouble getting into my skis and starting up the first hill out of transition. I was aware of people shouting and taking pictures, and all I could think about was my flailing arms and legs as I tried to gain my balance and get into a rhythm. The groomed trails snaked up and down hills and around sharp turns - much more technical than I was used to. In fact, most of the hills were new - recently made by dedicated snow making machines. I went out fast, determined to apply my newly learned skating skills and hill climbing techniques. Chris Li stood atop the biggest hill (Mount Weston), armed with camera and shouting "Shoot the varmint! Shoot the varmint!" (Anyone who's ever taken a ski lesson from the super speedy Andy Milne would know what that means.) It was all I could do to keep from laughing and sliding back down the hill. Nonetheless, I was grateful for my hill practice because that's where I passed almost everyone - on the hills - except for Pat, of course, who passed me on the hill. Because the course was small and wound back and forth, it gave me plenty of opportunity to see my fellow BTTers out there doing the whole race by themselves: Pat Dwyer, John Wozny, Peter Jensen, Mark Pelletier, Jim Sweeney, and Trish Kelly. Everyone was shouting words of encouragement to each other (which is why I just love wearing the blue and green). Trish, of course, had the biggest grin on her face the entire time. Kudos to Mark who broke his bike chain but went on to finish on a borrowed monster bike. Midway through my second and final loop, I realized I had gone out too fast, and it was all I could do to get myself to the finish line without vomiting. My mantra at this point was "don't fall, keep it together, don't fall, keep it together..." I saved all I had for the flats before the finish. And what a finish it was - I was greeted by my team mates who told me that we were the first relay! Who's in for next year?

Sunday was the first Annual Harpoon Time Trial. Not only did BTT have a great turnout, but we had some impressive performances. Former BTTer Cort Cramer continued his TT tear by winning the event. However, Brian Quigley was right on his heals (only 11 seconds back)... and finished second overall. Brian is primed to crush the BTT TT in a few weeks! We had a number of other good finishes….Matt Pokress, Jay Higginbottom, Ali Winslow, Jess Douglass, Stephen Wall, Evan Israelson and Trish.

And, it's worth mentioning that there was a good turnout at Ira Sills SGR in Cambridge. It was impressive that Jay Higginbottom showed up ready to run, having already completed the Harpoon TT in the morning. Even more impressive, however, was Trish... who hit the trifecta... Winter Tri, SGR and Harpoon TT. Some of you emailed me last week about how Trish doesn't need a nickname... she's just Trish. And, I'm beginning to agree. I mean, who else do we know who goes by one name and can get away with wearing a cowboy hat? 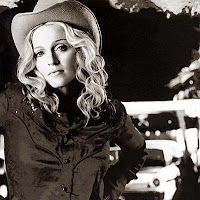 Need I say more?
POST YOUR RESULTS!
Posted by Pat Dwyer at 4:15 PM