This past frigid weekend brought a couple BTTers up to Derry, New Hampshire for the Boston Prep 16 miler. Now, talking from experience, these "in between" races (ie. races between half marathon and marathon distance) can be really, really tough. And, apparently that was the case here as BTT veterans Joe Kurtz and Jeff Aronis, who tackled the difficult course, can attest. Joe Kurtz writes:

As for the race, it is probably the hardest road race > 13 miles I have ever done. On the website they write 'moderately challenging', but everyone I talked to beforehand who had done the race previously looked at me in the same why I now look at people doing their first IM. It is somewhere between "You'll love it" and "You poor bastard." The profile is pretty nasty, and luckily someone told me that miles 9-13 were the 'tough ones.' So, my initial goal was to hold 7:00/mile pace for the day (you know, feel good at the end, etc), and including my standard 2:00 bathroom break in the middle (literally at the mile 8 marker), i ended up holding 7:15/mile for the day. But that is a bit misleading, as I ranged from 6:15 pace to close to 8:00, depending on the stage. And even though the weather was cold (9 degrees at start, -1 with wind chill), the sun was out, the aid stations were obviously set up and run by runners (who knew warm gatorade could ever taste good!), and if I was prepping for Boston, I would leave with so much confidence about the race, knowing that nothing on the marathon course is nearly that tough. Throw in the fact that they gave some good shwag (zippered long sleeve Coolmax shirt, and a nice running head band when you finished) and I'd definitely do it again, if only to be the one to give the "Poor bastard" face to someone else. 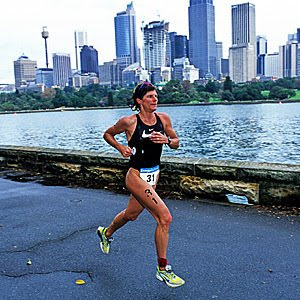 Also, here's a quick shoutout to local pro and triathlon legend, Karen Smyers, who was recently inducted into the triathlon hall of fame. For those that know Karen, she's one of the most approachable and friendly people out there. Slowtwitch recently interviewed Karen which can be found HERE. Congrats Karen!
Posted by Pat Dwyer at 8:49 PM